What do you want with me today, dark bird?
Why are you flying low, beneath that branch?
I know your shadow: you were long since gone,
My killdeer, tough-winged swallow, mourning dove, 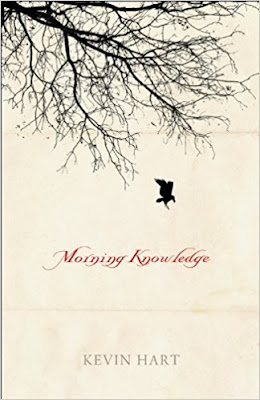 In Australia we like to think of Kevin Hart as an Australian poet, though he was born in England and didn't come here until he was 12, where he did the rest of his growing up in Brisbane, Queensland. He is usually referred to by critics, reviewers etc. as a British-Australian poet. He also has strong connections with America (though obviously is not to be confused with a US comedian of the same name).

Since his move to America his poetry, not surprisingly, often contains references to that environment – such as the mention, above, of the killdeer and mourning dove, birds not found in Australia. I suppose we must now view him as an international poet.

In an interview following the publication of Morning Knowledge, he is asked:


You are considered an Australian poet, and yet you were born in London, lived there until you were 11, and have now lived in the US for several years. How has this international perspective informed your work and in what way do you consider your poetry Australian?

He replies:
I live inside my poems, like a pip in a ripe pear, taking little notice of what goes on in the world of poetry. I read poems all the time, though I don’t do much to ‘keep up’ with American or British poetry. I hear myself as Australian, as someone who comes after Ken Slessor, Judith Wright, Alec Hope, Frank Webb, and David Campbell …
He is equally distinguished as a philosopher, theologian and literary critic, but it's as a poet that I know him. I can't claim any real acquaintance, though we sometimes ran across each other in our Melbourne days. I mean that I know him through his work. He's a beautiful poet – as I exclaimed in delight when a friend recently gave me this book; and as you can judge for yourself by this poem.

Harold Bloom, the eminent American literary critic and Sterling Professor of Humanities at Yale, is a great admirer of Hart's poetry, calling him, on the cover of this book, "The most outstanding Australian poet of his generation". With all due respect, I think I might be better acquainted with Australian poets than the Professor, and I believe that is excessive praise. I wouldn't presume to give anyone the guernsey, but I do think there are other contenders. However, Hart is certainly very good indeed, and has won numerous prestigious awards for his poetry over the years. (From what little I know of him, he seems to be a nice person too, and not big-headed as someone so greatly admired might easily have become.)

You can find out more about his career at Wikipedia and in this YouTube special.

The book this poem comes from, though it also includes love poems, nature poems and others, is largely concerned with his father's dying. (So the book's title is a play on the word "mourning".) These poems are deeply moving.

I like this particular one for its mystery – which nevertheless becomes all too comprehensible by the end of the poem. I love the culmination, and the way he makes that last, unpunctuated line move fast, as he begs the bird to do.

You can find this and his other poetry books at Amazon, including his next volume, Barefoot, which is due to be released on 28 February and is available now for pre-order.

I'd like to show you what he looks like, but I can't find a photo that is clearly free of copyright; and although I can post poems here "for purposes of study and review", I don't believe the same applies to photos. However, you can see his pleasant face if you follow the links (above) to the interview and/or YouTube.

There is a photo of him as a young man with this article on Poetry International Web, as well as a clickable list of several lovely poems that I'm sure you'll enjoy reading.

Email ThisBlogThis!Share to TwitterShare to FacebookShare to Pinterest
Labels: I Wish I'd Written This, Kevin Hart