I won’t write a political poem
okay?
I mean there are enough people doing that already
and I’m old and it’s a young person’s thing
and I don’t wear the bling of opinion as brightly as I used to
maybe the fires don’t burn as strong and the songs don’t sing as long as they used to
I’m happier writing about the quirky little peccadilloes of the human condition rather than waging a war of attrition on what’s left of my sensibilities and the indispensabilities of what I consider right and wrong
so don’t get me started
okay?

I won’t write a political poem
‘cause I’ve studied history and herstory seems to be the way we should have travelled
because the whole thing unravelled when men decided to run the show
and all the world’s major religions are run by bros who thumb their nose at the sisters
treat them like hoes and so it goes and so it goes and so it goes
around and around and around until we end up with an aggro misogynist clown who calls himself Minister for Women and rips off old people and single mothers and kicks the unemployed when they’re down
so don’t get me started okay?

I mean I shouldn’t have to write a political poem because we had flower power and love-ins and Vietnam moratoriums and Gough Whitlam and Germaine Greer and the Berlin Wall fell but still we plunge to hell in a handcart as the world gets hot under the collar as we follow the dollar until it disappears up the arse of some wallah who’s bought a government that governs for the class of the wallah up whose arse the dollar disappears so don’t get me started okay?

Well
I guess I got started
and this is a political poem
okay? 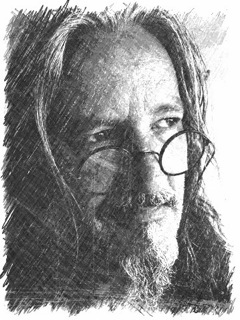 And what a beauty it is! It pretty much covers everything, in the Australian context anyway. Do I need to tell you that Robin Archbold (affectionately known as 'Archie') is a 'spoken word' poet and this piece is meant to be read aloud? I'm sure you can tell. Do try reading it aloud for yourself and listening to the helter-skelter flow, the rappy rhyming, and the sheer, belligerent defiance of that last 'okay?'

I notice that sometimes very Aussie poems don't go across very well here, to people who don't have the same background. We think we all speak English, but there are big differences! It's sometimes hard for me to tell, because I live here and grew up with this way of using the language. You know the saying about fish – that they don't know there's water, because they're swimming in it? In the same way, I don't always know that particular words and phrases are peculiar to Australia. They seem normal to me; I'm swimming in them.

But it looks to me as if this poem will translate well.

I'll just explain, for those who don't know, that it was our former Prime Minister Tony Abbott who appointed himself Minister for Women, and was later the subject of Julia Gillard's famous 'misogyny' speech when she was Prime Minister.

This poem, as you see, was written some little time ago – but sadly, although our Prime Minister has changed, is still far too relevant. So this is a political post, OK?

Sometimes we find the state of the world too much, and want to turn our attention instead to what beauty and optimism we can find. Sometimes we NEED to do that, to avoid despair ... or just because we're tired. And sometimes it's needful to confront what's going on, give it some thought, and make a choice to protest it.

Robin Archbold and I met at a memorable perfomance event near Byron Bay, for the 70th birthday of our mutual friend (now the late) Daevid Allen. It was a great night, with some wild and wonderful poetry and music.  We've remained in touch on facebook, and I've followed his career (already thriving then, and continuing to develop) into academia and prose writing – with no loss of poetry.

If you Google him, you'll find all manner of interesting articles and videos.

Robin Archbold is the first performer to have won both the Woodford Folk Festival Poetry Slam and the Storytelling Award. The only other is David Hallett. Robin, or Archie as he’s widely known, is a multi-festival feature performer, workshop presenter, co-founder of the Nimbin Performance Poetry World Cup in 2003, and founder of Sunshine Coast Spoken Word in 2013.  He’s performed at venues from the Sydney Theatre Company to the Gympie Muster Poets’ Breakfast where he disrobed in front of a 1000 strong crowd—a first and a last in a single unpantsing. He has a Creative Writing Degree from the University of the Sunshine Coast, where he is a sessional academic, and he’s halfway through a ridiculously long debut novel. He’s published three books of poetry and stories, Small enormous Things in 2007, and Basic Human Writes and The Storyteller’s Tales in 2014.

(The Gympie Music Muster is a well-known outdoor country music and camping festival in Queensland. Check the link for more details.)