This week we are pleased to feature one of our newer members, Frank J. Tassone, who blogs at American Haijin. Frank lives near New York, and has a very interesting story. He is sharing some of his wonderful poetry with us, along with some photos from his travels. Pour yourself a cup of coffee or tea, and pull your chairs up close. You won't want to miss a single word. Let's dive in! 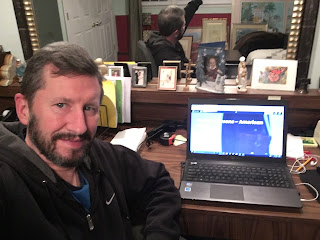 Sherry: Frank, we are so happy to be visiting with you. Give us a peek at the poet at home, won't you?

Frank: I am a husband, father, writer and teacher. 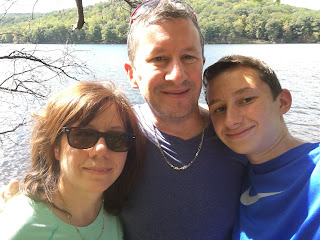 I live in Montebello, New York, about thirty-five miles northwest of New York City as the crow flies. It’s the ideal location for either catching a Broadway show or taking a day’s hike through the mountains.

I live with Mira, my wife of seventeen-plus years and our fourteen-year old son, Frank.

Sherry: That is very meaningful and important work. And how wonderful to live so close to New York, yet at a bit of a distance. The best of both worlds. Where did you grow up, Frank?

Frank: I am a son of the Lower Hudson Valley of New York State. I grew up in Sleepy Hollow, NY in Westchester County, and New City, NY— across the Hudson River in Rockland County.

Sherry: Have you always written?

Frank: I’ve always enjoyed reading and writing. My parents surrounded me with books, and even bought me three sets of encyclopedia. I loved animals as a child, and my first writings were 1-page animal reports. I experimented with fiction at age twelve, when I wrote my first short story.

My first poem, written in high school, was a sixteen-line, four verse, abab-rhyming lyric for a friend infatuated with a girl. Since he didn’t know what to say, I played Cyrano de Bergerac for him! After that, I wrote poems for myself, and I quickly discovered free verse. 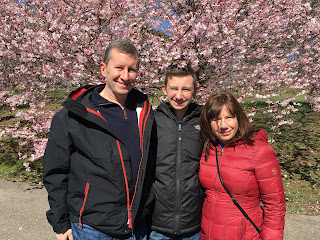 Sherry: Was there someone you feel had a significant influence on your becoming a poet? Someone who encouraged your gifts?

Frank: I had a drive to write from early on. My parents sympathized, and cautiously supported me, but they were also concerned that I have a career to “fall back on.” I’ve also had English teachers through the years that encouraged me.

Sherry: What do you love about poetry? I note your interest in haiku, haiki, tanka and haibun. When did this fascination begin and what inspired it?

Frank: I love language. I enjoy how it shapes the very way in which we perceive. I totally agree with Ursula Le Guin when she writes that poetry is concentrated language par excellence.  It helps me to conceptualize, even incarnate, subtle emotions and obscure ideas that otherwise would remain unknowable.

Haikai poetry—the family of Japanese-inspired poetry forms like haiku, senryu, tanka and haibun—inspires me the most. The subtle beauty and brilliant presence of the juxtaposed images utilized by these forms produce a feast of epiphanies.

I first encountered tanka and haiku during a college course on Japanese history, in the fall of 1990. I wrote some haiku, on and off, through the intervening years, including some truly awful ‘ku in the mid-2000s. Then I discovered Hortensia Anderson’s haibun on Contemporary Haibun Online (CHO), and I was hooked! I devoured her poetry, and went on to read haibun and haiku from other haijin (from Basho to Roberta Beary, and beyond!) I soon wrote haibun and haiku almost exclusively from that point on (somewhere around 2007.)

Sherry: Would you like to  share four poems with us? Perhaps one of each -(haiku, haiki, haibun and tanka) - and point out to us the features of each form?

Frank: I would be happy to!

I’ll begin with a haiku:

First, let’s clear up a common misconception: a haiku does not have to have a 5-7-5 syllable count. It does include two juxtaposed images that, when combined, create an “Ah” or “a-ha!” moment. They typically include a seasonal reference called a kigo, and a cutting word/phrase.

This haiku’s juxtaposed images recall the actual Christmas truce called during WWI, when enemy soldiers exchanged cigarettes and pleasantries, instead of bloodshed and death, across the dread No Man’s Land between their trenches.

Sherry: I love that story! Two wonderful movies have been made about that exchange.

Frank: My next selection is a haibun:

We cleared gravy-stained plates and tainted wine glasses. The remains of the turkey could feed the five of us for days.

It was the first year we didn't host. Mom and Dad invited us downstairs instead. We had arranged to eat dinner with them and then travel to my Sister-in-law's for dessert. She hosted dinner for the rest of my wife's family in our place.

As we said goodbye, my father's sadness showed in his resigned eyes. I carried his face with me long after we left.

"Did we leave too early?" I asked. We had already passed the Spring Valley toll on the thruway.

She glared at me. Her silence was answer enough.

A haibun consists of a title, prose-poetry and haiku. All three complement each other, forming a whole through juxtaposition. In this haibun, the prose describes a familiar conflict that happens during the holidays—my wife and I have “conflicted expectations” on spending time with our respective families. The haiku accents this.

“Thanksgiving Day” is the season word (kigo) that emphasizes the irony of a holiday being the occasion of discord. The cutting phrase—a murder of crows—embodies the chill, deathlike aspect of Autumn, and the cold silence between us.

Next up, a tanka. This one is the tanka from a tanka-prose (a haibun that includes tanka instead of haiku) published in Image Curve:

A tanka is typically written in five lines. It also uses juxtaposed images in the first three lines (typically). The remaining lines provide space for the poet to expand on the emotion or idea expounded in the first lines. Here, I juxtaposed the image of falling leaves in an autumn wind with a sudden opening of traffic in a congested highway.

Finally, there is the senryu:

the senryu, unlike the haiku, focus especially on human nature. They can be funny, sarcastic, poignant, or whatever; they usually reveal something of our imperfections in answer. They may, or may not, have a seasonal or nature reference. This one does—that last line. 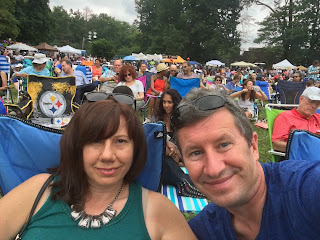 Sherry: Thank you, Frank, for explaining the distinctions. I understand you enjoy performance poetry. Would you like to tell us a bit about this?

Frank: I read original poetry once at an Open Mic event in Johnson City, New York (just outside of Binghamton) during college. I read again in 1994, at a now-defunct coffee bar called Caffeine Jones, in New City. I wouldn’t read again for twenty years. That’s when we discovered a sign for a poetry slam while walking through Nyack, New York. We decided to attend, and I felt blown away!

Sherry: It sounds like a blast! When you aren’t working or writing, what other activities do you enjoy?

Frank: My wife and I love to hike. We’re fifteen minutes drive from Harriman State Park, one of the best day hiking parks in the country. We’ve hiked through Vermont and upstate New York, and we hope to hike the 47 peaks of the Adirondacks in Upstate New York some day. We also meditate as often as possible. I practice tai chi as close to once a day as I can. Of course, I always have a book (or three) lying close at hand. Then, there’s my shameless addiction to anything Star Wars or Marvel Cinematic Universe related! 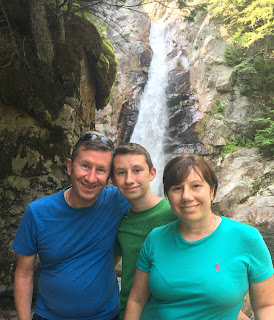 Sherry: It is wonderful to get out in nature as a family. That will stay with your son all his life. I understand you love to travel. In all of your journeying, is there one trip that stands out?

Frank: Our “bucket list” trip was a Princess land-and-sea tour of Alaska that we took two years ago. We traveled up from Anchorage through the interior, where we stayed at two different wilderness lodges, toured a National forest (with views of a Moose cow and her calf), and took a photograph of the elusive Denali! (It’s not the best photograph, as we were far by that point) 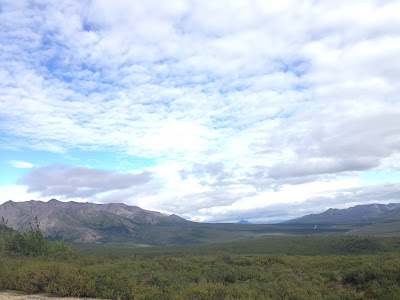 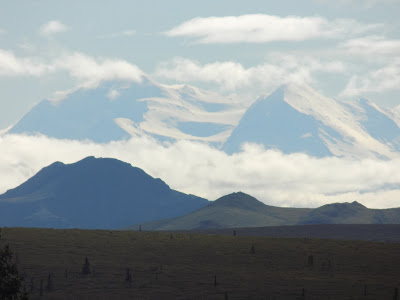 A glass-top private train ride back to the coast brought us to our ship. We sailed southeast along the coast. Along the way, we saw Hubbard Glacier, Marjorie and the many other glaciers in Glacier Bay National Park, the picturesque beauty of the Yukon territory (via train ride out of Skagway), humpback whales bubble-feeding in a bay off Juneau, Mendenhall Glacier (where this familial photo was taken): 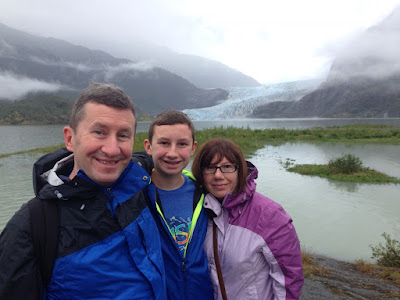 Not to mention another familiar sight, taken during a tour of Tongas National Forest: 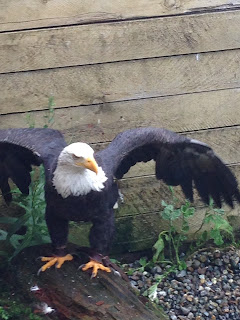 Sherry: Sigh. One of the trips on my Bucket List was the Denali wildlife refuge. How wonderful that you experienced it.

Frank: Our most recent trip was to Acadia National Park in Maine. After two days of fog, the sun finally burned through. We took advantage and hiked up Cadillac Mountain, the highest peak in the park. 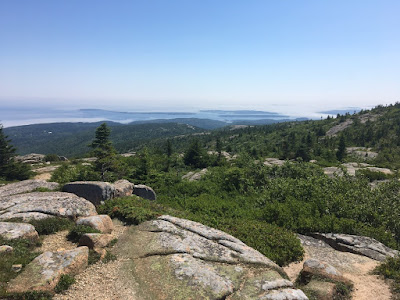 We also took a breathtaking hike along a ridge trail beside the ocean. 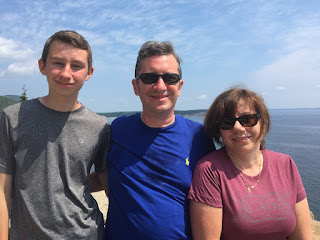 Sherry: Thanks for sharing your wonderful travels, Frank. I love the photos!

Is there anything you’d like to say to Poets United? 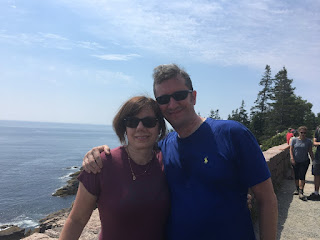 Frank: I used to complain that I wanted to write but didn’t have the time. One day, Mira said, “Then go write, already! I’m tired of hearing you complain all the time!” With that permission, I quickly developed a large file of haibun. Soon, I mustered up the courage to submit “Conflicted Expectations” to Contemporary Haibun Online. I soon had other haibun published there and in Haibun Today. Then, through the Meetup App, I connected with the editor-in-chief of a new literary journal, Image Curve. I became a contributing poet with the journal, where I’ve submitted haibun weekly for the past two-and-a-half years.

If I can offer any advice to new poets, and writers in general, it is this: write! Write, and seize any opportunities that come your way. Put your work into circulation. Find out what a publication needs, and match your poetry to that need, and submit! But above all, write! And enjoy every word of it—even when it hurts!

Sherry: I love what your wife said. Just do it! LOL. Wonderful and encouraging advice! Thanks, Frank, for allowing us to get to know you better!

Frank: Thank you, Sherry! I’m honored to have this opportunity to share with you and all of Poets United!

Wasn't this fun, my friends? It is so nice to see photos from other places, for we armchair travellers. Do come back and see who we talk to next. Who knows? (I don't, at this particular moment.) It might be you!

Email ThisBlogThis!Share to TwitterShare to FacebookShare to Pinterest
Labels: Frank J. Tassone, The Life of a Poet (Interviews)