BLOG OF THE WEEK: SAYING FAREWELL TO THE UNKNOWN GNOME

Sadly, my friends, this week we are saying farewell to Steve Sullivan, The Unknown Gnome, one of Poets United's very first members, who died of pancreatic cancer on March 7th. Steve's wife, Trini, his beloved Dulcina, is kindly allowing me to feature this gentle man, who was my friend. There is a beautiful love story here, so pour a glass of wine. Set out some dark chocolate. Let's have one last bittersweet visit with Steve. 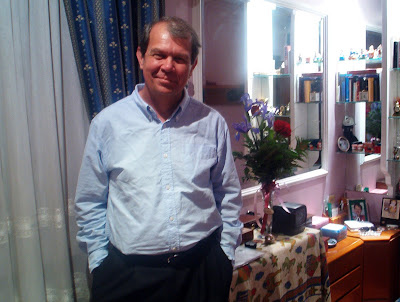 I first interviewed Steve in 2011 and was immediately enraptured by his and Trini's beautiful love story. Steve, (nicknamed TUG online), hails from the USA, but he and Trini, (known online as Dulcina), fell in love across the miles, as some of us sometimes do, through their poems, and Steve followed his heart to Cantabria, Spain, to be with Trini. They married in 2006. 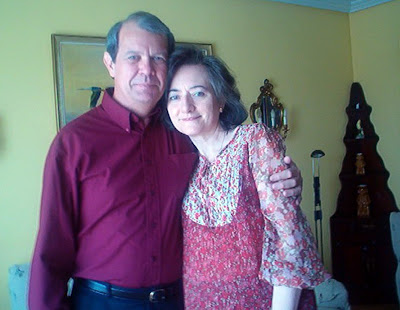 Here is their beautiful little cottage among the mountain peaks. This is where Steve chose to be when he took his last breaths in Trini's arms on March 7th. 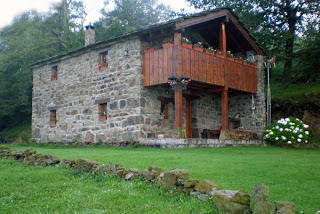 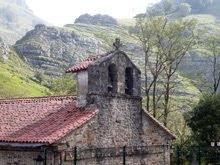 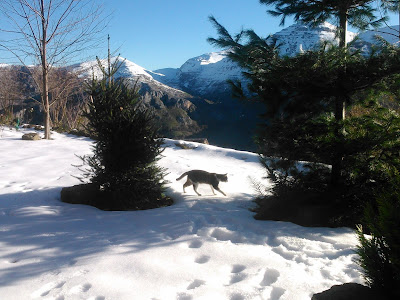 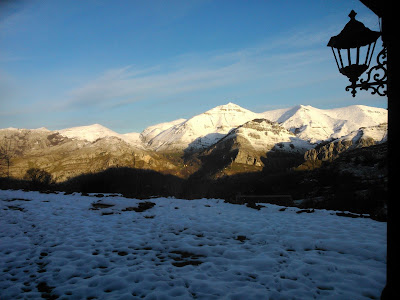 This is their spectacular view.
They truly live among the peaks.

One of Steve's biggest chores, when he was well,  was cutting the grass. But he didn't forget to leave a love note to Trini on the lawn. 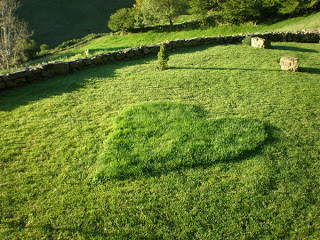 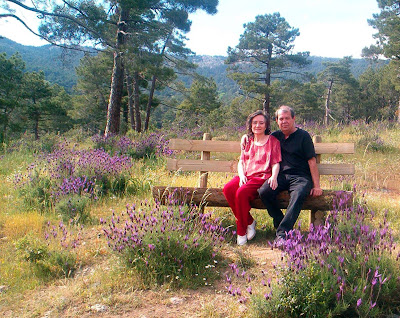 Trini tells us that everything happened very fast with Steve. His sufferings began at the beginning of the year. He was taken to hospital February 11. The doctors discovered he had pancreatic cancer, stage IV, terrible news.

In February, while in hospital, Steve penned these final lines. He always described himself as "a simple gnome, writing simple poems". But he was so much more than that. He will be remembered through his beautiful poems, and the books and loving memories he left behind. He had such a beautiful and faithful heart. He and Trini lived a God-centered life together, as you will see from these poems.

in between the beats of pain
in half breath of your love, lord,
i breathe

i never knew death
would come with such a lovely smile 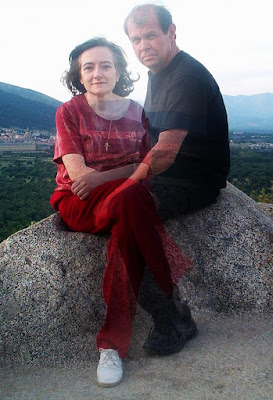 Treatment was to begin March 9, and Steve told the doctor he wanted to be at home until then. An ambulance took him there February 23rd.

On March 7, half an hour before he took his last breath, he told Trini he wanted to watch the Divinity channel.  Trini says, "My Steve, after so much suffering, wanted to see Divinity. I can feel him in the air  and taking care of me every second. He IS a man of God."

Steve often addressed his friends as "dear one". Here is a poem from 2013:

dear one,
write them
write of the rest one finds in pause
where to think beyond themselves
is peace

In what were to be his final years, Steve worked on a series of books, which were beautifully done, with poetry and wonderful images. I am proud to possess his books, which are truly  works of art.

Trini tells us, "My Steve said that writing was killing him, but he did not stop until he could finish his last work of poetry, "SBB Trilogy", "The Unseen Seed", "The Unheard Word" and "The Unvoiced Vox", completed with Notes in "Postmortem".

"He spent hours and hours without end writing at his computer. He knew his time on earth was coming to an end. How could he know? He IS - not "was" -  a gifted soul." 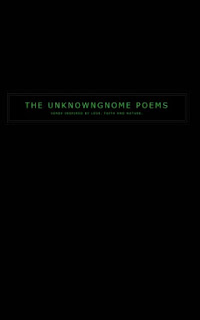 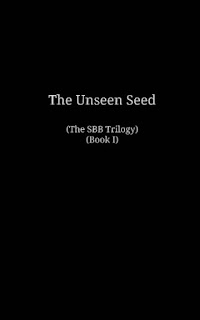 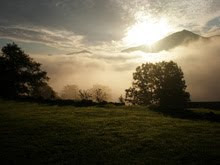 Trini posted the following poem shortly after Steve's death: "My Steve wrote this beautiful poem about us sleeping embraced in 2015. My Steve is and will be always alive in my soul and in his poetry. Love and good poets are immortal."

as our parting is to be
i leave you this

Sigh. So much love. Tears of joy, that this man lived and loved so well. Tears of sadness at his passing.

Steve leaves behind his loving wife, Trini, his son Shawn and daughter Shannon, and their partners, and some adored small grandchildren, to whom he was beloved Grandpa Sully. His wife and family will miss his loving presence every day. We poets in the blogosphere will miss him, too. He encouraged our dreams. He was a beautiful poet, a true friend, and a loving presence online.

Steve, you make me want to be a better person. You will never be forgotten. Trini, our hearts go out to you. And you are right: love and good poets are immortal.

Sadness at the passing of this fine man, one of our own. And gratitude for having known him. Do come back and see who we talk to next, my friends. Who knows? It might be you!

Email ThisBlogThis!Share to TwitterShare to FacebookShare to Pinterest
Labels: Dulcina, Past Poetry Blogs of the Week, Steve Sullivan, The Unknown Gnome, The Unknowngnome