and what am I, darling?
Exhausted 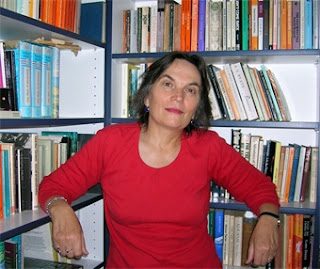 Dorothy Porter (Dorothy Featherstone Porter in her early publications) was very much a Sydney poet, though she later moved to Melbourne. I'm sharing this beautiful love poem with you today specifically because tomorrow is the Sydney Gay and Lesbian Mardi Gras. I quote Wikipedia:

"Porter was an open lesbian and in 1993 moved to Melbourne to be with her partner, fellow writer Andrea Goldsmith. The couple were coincidentally both shortlisted in the 2003 Miles Franklin Award for literature. In 2009, Porter was posthumously recognised by the website Samesame.com.au as one of the most influential gay and lesbian Australians.
Porter was a self-described pagan, committed to pagan principles of courage, stoicism and commitment to the earth and beauty."

A few nights ago I watched the Australian TV movie, "Riot". It chronicles the beginnings of the Mardi Gras, and the horrendous injustices and abuses which both preceded and characterised that first Mardi Gras, 40 years ago. It's been a long, hard battle – one which I, as a straight woman, have not personally had to fight – but gay pride has become more and more celebrated, particularly at this now world-famous event in which many straight people also participate in support. (This year Cher will be guest of honour.) And times have changed. Recently the Australian public supported the right of gay couples to marry, and that right became law.

So here is a poem celebrating love, a poem which I'm sure cannot fail to move us all – written by a gay woman who was known for her courage and authenticity as well as her wonderful, often innovative poetry.

A major Australian poet, she won a number of literary awards, wrote several highly successful verse novels as well as other poetry, was a feisty performer of her work at spoken word events, wrote opera libretti, and was collaborating with Tim Finn at the time of her death, writing lyrics which he put to music. She died far too young, from breast cancer. She is not forgotten!

I featured her once before, a couple of years back, with another yummy love poem. Click here.

There is a detailed biography, as well as a large collection of her poems, at Australian Poetry Library. She wrote on many other topics as well. Do have a read!

Her books are available at her Amazon page. (I own copies of most of them, either in paperback or as ebooks, and return to them time and again.)

This photo of Dorothy Porter is made available for download by Pan Macmillan.