[These red dresses were hung in the trees on Tofino's Village Green in 2015, as part of the REDress Project, begun by the artist Jaime Black, in Winnipeg, Manitoba,  in memory of the Missing and Murdered Aboriginal Women of Canada. Below is Tofino poet Janis McDougall's poem honouring these women, which she presented recently at a local poetry event. The video was filmed by Joanna Streetly, our Poet Laureate, whom you have already met.]


Missing You
What would a celebration
of west coast women be
without holding space
for the absence
of you?  All of you.

You, who were taken
leaving no trace but
the salt of our tears.
It has been years, yet
all the red tape
in the nation
will not silence
this endless grief.

Her auntie said that red
is the only colour
the spirits can see. So this
is my bleeding
invitation
to attend, to witness, to be
among celebrated women,
to know you are honoured,
to know you are missed. 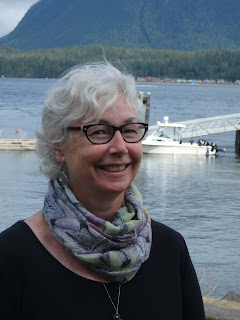 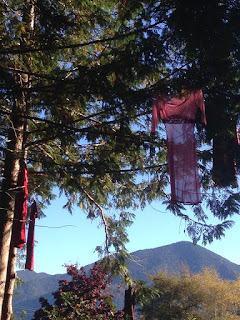 In Canada, over the years, many women and girls have gone missing, some of whom have been murdered, their bodies recovered, many more for whom there have been no answers, no closure. Among the estimated 4,000 Missing and Murdered Women, 60 to 70% have been aboriginal. (This estimate of the missing comes from the Canadian Minister for the Status of Women in 2016.)  Many, (around 40 young women), have gone missing along the Highway of Tears in the north. 49 women from Vancouver's Lower East Side were murdered by one man.

In 2016, a national inquiry was begun, independent of all government, to look into the missing and murdered women. It has been fraught with difficulties.

Jan is a member of the Clayoquot Writers' Group in Tofino. She has been writing since she was in her teens, encouraged by her English teachers. In 2015, Jan created an arresting work of art to honour the missing women, as part of Tofino's participation in the REDress Project. 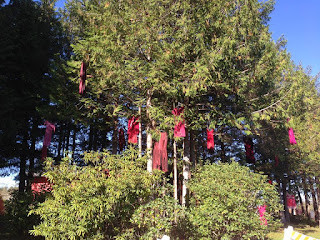 Jan explains, "It seemed like there was just too much red tape. It occurred to me to create a dress with red tape, as a statement piece, for our local installation at the Village Green in Tofino. I had in mind to use red tape that said: 'Fragile, Handle with Care', as I imagined the Post Office might have some for sale. However, I had to use the only kind of red tape I could find in my small town. I applied the tape to a lacy vintage slip. We hung about twenty dresses in the trees by the village green. It was autumn. It was haunting." 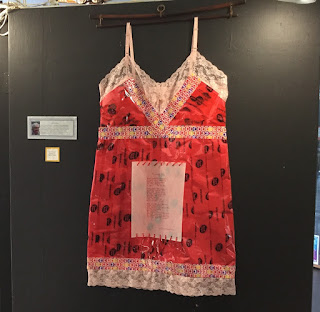 The result is in the video above. Two years later, the Pacific Rim Arts Society put out a call for submissions to their 2017 Cultural Heritage Festival Show. The theme was "Celebrating Women of the West Coast".

Jan explains, "I wanted to submit a poem to the art show and was considering the challenge of entering a literary piece into a show traditionally displaying visual arts. Magically, I came up with the idea to honour the women who were absent, the missing women. I mounted the poem on the same dress of red tape. My piece was accepted into the art show, held at the Black Rock Resort in September 2017."

It made, and makes, a very moving statement, wherever it is displayed. 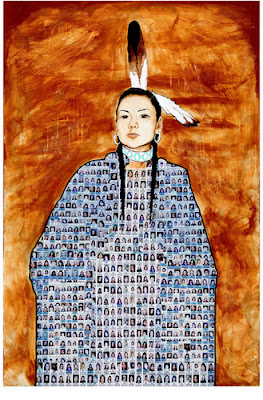 STILL DANCING
by Jonathan Labillois
[faces of some of the missing]

As I am wont to do, I asked Jan what she loves about poetry.

"I love the surprise that writing poetry reveals to me," she replied. "I love the challenge of conveying emotion and illustration in a very tight and sparse piece without revealing too much, allowing the reader to participate in the deciphering. I especially love crafting the poem for the desired pattern, rhythm and sounds I want to orchestrate. I take pleasure in reading and puzzling the craft, mystery and surprise in other poets' poetry." 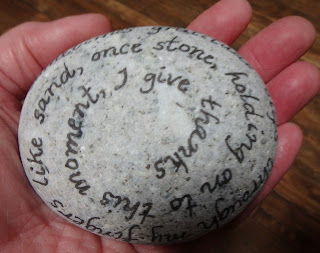 Jan also presents small nuggets of poetry in her unique Poetry Stones. They are favourites of mine, and I have several of them. Jan combines her love of finding beauty in nature with communicating compassion, creating original verses which she writes by hand on smooth stones from local beaches. On her poetry  stones, Jan writes about energy, mindfulness, gratitude, and the ocean, sending the stones out to transfer energy all over the world. 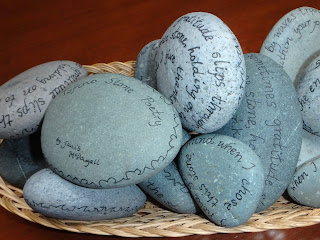 Jan's poetry has been published in two local anthologies, Salt In Our Blood  and Crowlogue, as well as in the We'Moon Date Book and the Sound magazine in Tofino. Her essay, So, When Are You Moving Back?, is in the anthology: Writing the West Coast.