Here you come, memory,
with your big bag.
Or is it me staggering
hauling the monster treasure?
Or me there inside?
(Just inside my boundaries
waits last year's woman,
behind my nose, her nose,
further inside, the schoolgirl
with her stained finger callus,
holding the baby, the oldest me, in the dark
like a wooden babushka.)

I wake up struggling with memory.
Tar and feathers, tar and feathers
stifle and stink and thicken
all over this nincompoop
schoolgirl shamed in class
over and over
all over again

Memory, my good dog, you eat up
the food I have set.
Then we go for a walk.
I have a path in mind;
you have your concerns.
Each course you set
by landmarks I can't discern
hauls at the walk we design
together. 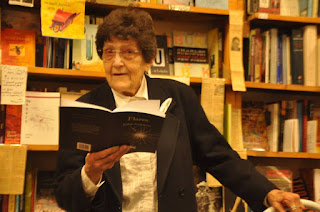 The Australian poetry world is still reeling – and grieving – after the death of Judith Rodriguez a week ago. She was 82. Her work started appearing in journals and anthologies when she was still a very young woman, so it seems she's been around forever. Not only that, but she was active on the poetry scene to the last; always writing, and sharing her work in print and at readings. She was a generous friend and supporter to many other poets, and was universally loved and respected. A familiar figure behind the mic, particularly in her home town of Melbourne but also all over the country, she attended readings as much to hear other new poetry as to share her own.

Here is a lovely interview and reading from only two months ago, drawing from her last book, The Feather Boy. Do listen! She reads some wonderful stuff. You can read a collection of her poetry on the page – or rather, screen – at her entry in Australian Poetry Library. While you're  there, look up Nu-Plastik Fanfare Red, one of her most popular poems. I think you'll enjoy it too.

A Member of the Order of Australia and the recipient of many literary awards, she was nevertheless completely down-to-earth and lacking in conceit. My personal memories of her are of her energy and humour; her unfailing kindness to me and others; and how clearly and deeply she saw me, even though we were warmly acquainted rather than close friends. That degree of insight must have been one of the gifts which made her such a remarkable poet.

Her entry in Wikipedia is so brief – apart from the long lists of publications and awards – that I'll quote it all (apart from those long lists, which you can find at the link):

Judith Rodriguez was born Judith Catherine Green in Perth and grew up in Brisbane. She was educated at Brisbane Girls Grammar School, and graduated from the University of Queensland with a Bachelor of Arts. She then travelled to England, where she received a Master of Arts from Cambridge University in 1965, where she met her first husband, Colombian Fabio Rodriguez.

She published numerous volumes of poetry, some illustrated by her own woodcuts, edited an anthology and the collected poems of Jennifer Rankin. From 1979 to 1982, she was poetry editor of the literary journal Meanjin, and from 1988 to 1997 she was a poetry editor with the publisher Penguin Australia. The play Poor Johanna, co-written with Robyn Archer, was produced in 1994 and her libretto for Moya Henderson's opera Lindy, about the Azaria Chamberlain disappearance, was performed at the Sydney Opera House in 2002. She was a recipient of the Christopher Brennan Award and taught at La Trobe University (1969–1985) and Deakin University (1998–2003).
Rodriguez died on 22 November 2018. She is survived by her four children and their father, and by her second husband, Tom Shapcott, who she married in 1982.

[Shapcott is a distinguished poet himself.]

Her death notice in one of Australia's leading newspapers, The Sydney Morning Herald, reads (in part):

She was a fine poet and artist, a loyal and valued friend, teacher and mentor to many and a fierce campaigner for human rights.

Her obituary from PEN International (an organisation which uses letter-writing campaigns to help free writers imprisoned for their work or opinions) says:

Judith dedicated her life to the promotion of literature, and the defence of the voiceless.... Professionally, she combined poetry, university teaching, publishing, and printmaking. She sometimes illustrated her poetry with woodcuts and had exhibitions of her prints in Australia and Paris.

As that last suggests, she was known internationally too, and had taught in overseas as well as Australian universities.

Hers was a very distinctive poetic voice. She was not a confessional poet. She did sometimes write about herself, but not in confessional mode; more because she loved to explore what it is to be human. She often wrote about other people, whether historical or observed in person, and about other forms of life too – trees, mudcrabs, mountains, lakes, birds....


'I write poetry in order to live more fully,' she said.

Material shared in 'The Living Dead' is presented for study and review. Poems, photos and other writings and images remain the property of the copyright owners, where applicable (older poems may be out of copyright). This photo of Judith, Copyright © Di Cousens 2016, was taken at the launch of her book Flares in that year.