~ Honouring our poetic ancestors ~
From for colored girls who have considered suicide ...
i sat up one nite walkin a boardin house
screamin/ cryin/ the ghost of another woman
who waz missin what I waz missin
i wanted to jump up outta my bones
& be done wit myself
leave me alone
& go on in the wind
it waz too much
i fell into a numbness
til the only tree i cd see
took me up in her branches
held me in the breeze
made me dawn dew
that chill at daybreak
the sun wrapped me up swingin rose light everywhere
the sky laid over me like a million men
i waz cold/ i waz burnin up/ a child
& endlessly weavin garments for the moon
wit my tears
I found god in myself
& i loved her/ i loved her fiercely
-- Ntozake Shange (1948 -2018) 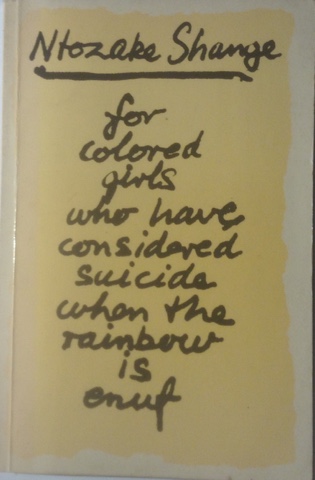 American playwright, poet and author Ntozake Shange died in her sleep (after illness) just a few days ago on October 27, at the age of 70. Although I never met her and knew only a little of her work, I feel bereft.
Her most famous work was the 'choreopoem' (a term she coined) usually known by the abbreviated title, for colored girls. It combined poetry, dance, song and colour. The book of poetry was first published in 1977; the work was presented on stage in many places, including Melbourne, Australia where I was lucky enough to experience it. It was electrifying! The selection above is the final soliloquy, almost the end of the book. It comes after seven black women have presented stories of both trauma and triumph, which are at once shocking and deeply engaging.
But anything I could say about it would be to sell it short. It can't adequately be described, only reproduced -- and to take one section out of context as I've done here is woefully insufficient too. I think it's the most moving and amazing piece of theatre I've ever encountered, and that includes Skakespeare, grand opera and Marcel Marceau. During that era I also managed to track down some of her other poetry, and found it always remarkable, a feast for both brain and emotions. She has been quoted as saying she never condescended to her audiences and always got audiences. Do grab the book if you can -- or, I have just learned, there was a film made in 2010.
There are several YouTube interviews, there are poems on PoemHunter, and you can find her books at Amazon and other places online. (Forgive me for not giving you direct links this time. My laptop is away from home just now, being scanned for possible viruses etc., and I am not adept at blogging via tablet.)
After her death, her sister said, "It’s a huge loss for the world. I don’t think there’s a day on the planet when there’s not a young woman who discovers herself through the words of my sister." I believe it! I must have been in my forties myself when I saw the play, I am not black-skinned, and I don't live in America -- yet it had that effect on me too and I remember its impact to this day, 30-some years later.
My Poets United colleague Susan was also deeply affected by it -- as she recounted in relation to the poem she shared in last Sunday's Poetry Pantry.
Shange herself said, a long time after creating it, in one of the interviews available on YouTube, 'It was very much a part of the political fabric of its time'. While that is clearly true, I think it transcends its origins. 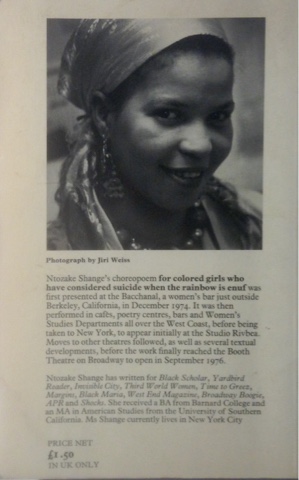 Material shared in 'The Living Dead' is presented for study and review. Poems, photos and other writings and images remain the property of the copyright owners, where applicable.This photo of Ntozake Shange is made available via Creative Commons licence CC BY-SA 3.0; details and attribution here.