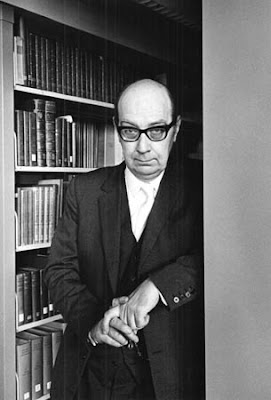 Love and Death in Hull – Philip Larkin
Life is first boredom, then fear.
From ‘Dockery and Son’ by Philip Larkin (9 August 1922 – 2 December 1985)
If ever someone could be said to have lived a writer’s life it would be Philip Larkin. One of the 20th century’s greatest poets, yet who only ever published three mature collections of poetry over a glacially slow three decades, he nevertheless warded off any encroachments upon his independence with almost pathological fervour and was terrified by the prospect of a future filled with marriage and kids (“Children are horrible, aren’t they?”).

However, this view of family life is hardly surprising when we consider his upbringing in stifling middleclass Coventry, England, with father Sydney; affluent treasurer and sometime admirer of Hitler; and mother Eva; hopelessly and willingly helpless. Doting yet distant, Larkin’s parents were the model of tight-lipped post-World War I English suburbia and the model for everything Larkin feared about family life. His childhood (which he often dismissed as a “forgotten boredom” in interviews) was further restricted by extremely poor eyesight and a stammer; though he overcame the latter and the former proved to be a boon, of sorts, by preventing him from being fit to serve in World War II. 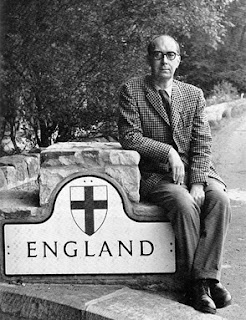 Like everything else in his life, Larkin found plenty to complain about when he went up to St John’s College, Oxford, to read English. But despite his grumbling he appears to have had some of the most carefree days of his life; making lifelong friendships, including one Kingsley Amis, drinking copiously and listening to his beloved jazz. He also went down with a first-class honours degree.

After graduating in 1943, fearing the government would find work for him if he could not; he successfully applied for the one-man position of librarian in a tiny provincial public library. Larkin was to spend the rest of his life as a librarian; working up to the rather more prestigious and demanding role of University Librarian at the University of Hull which he held from 1955 until his death. By all accounts he enjoyed his vocation and was extremely effective in it. More importantly, had he ever attempted to live as a professional poet he might never have produced the poem ‘Toads’:

Why should I let the toad work
Squat on my life?

Larkin’s early collection of poetry The North Ship was published in 1945 and is heavily mired in the influence of W.B. Yeats. However, by the time his first mature work The Less Deceived was published in 1955 he had discovered the wonderful poetry of Thomas Hardy which allowed him to create the voice that would catapult him to the very heights of literary acclaim with poems such as ‘Church Going’:

A serious house on a serious earth it is,
In whose blent air all our compulsions meet,
Are recognized, and robed as destinies.

His next collection was not published until 1964; The Whitsun Weddings is his greatest achievement and includes many of his most popular poems, such as ‘An Arundel Tomb’ and the title poem:


His mother Eva lived until 1977 and thus loomed over almost all of her son’s life which was perhaps another reason (or excuse) why he never felt able to commit to a woman, though this is hardly an excuse for years of juggling with the emotions of the two other most important women in his life, Maeve Brennan and Monica Jones. It is debatable as to whether it speaks to Larkin’s credit or Maeve & Monica’s detriment that they suffered his caprice and self-absorption. However, it is does appear that his mother’s death coincided with the drying-up of his poetic output: his last collection, though not his best (which is still better than most), High Windows, was published in 1974 and was thought by some critics not to meet the high standards achieved by Larkin in the two preceding collections, though it does include many memorable poems like the ominous ‘The Building’:

The porters are scruffy; what keep drawing up
At the entrance are not taxis; and in the hall
As well as creepers hangs a frightening smell.

And the brutal ‘The Old Fools’:

At death; you break up: The bits that were you
Start speeding away from each other for ever
With no one to see you. 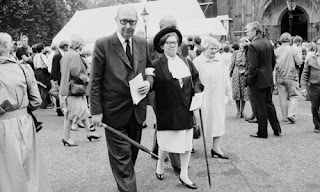 Larkin’s popularity comes partly from the fact that his poems are so accessible, not for him the symbolism of his youthful idol Yeats, but they are written about recognisable themes and events; universal themes which usually revolve around mankind’s two great preoccupations love/relationships and death. Many are stark but have a reflective melancholia to them – and amongst the beauty in misery there is much humour to be found. His poems are also precisely structured and he lamented poets for whom grammar seemed a dirty word.

Larkin spent his final years reluctantly and worrisomely accepting honorary degrees and produced very little poetry of any real quality. He succumbed to oesophageal cancer in 1985, the early death he had spent most of life fearing, but he did leave us with this last masterpiece:

- Larkin published two novels, Jill and A Girl in Winter, in the forties and always intended to be a novel, until the novels stopped coming, believing that the novel was the higher art form - ironically his friend Kingsley Amis, a highly successful novelist, always believed that the poem was the superior form.

- Larkin was always passionate about jazz and for many years reviewed it for The Daily Telegraph – always saving special scorn for those artists, who shall remain nameless, he deemed to be indulging themselves a little too much. 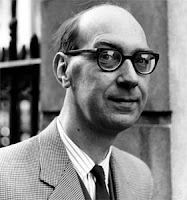 ‘Toads’
‘The Whitsun Weddings’
‘An Arundel Tomb’
‘The Explosion’
‘Aubade’


This piece on Philip Larkin was written by Jacob Knowles-Smith, an enthusiastic and always helpful supporter of Poets United.
If you would like to learn more about Jacob you can do so by checking out his “The Life of a Poet” interview (found here on Poets United) or by visiting his poetry blog First Boredom, Then Beer. Jacob is a regular author in the Poet History series so you can find more of his insightful and informative writings throughout Poets United.
Posted by Poets United