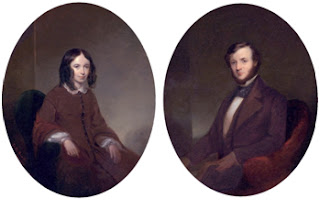 Elizabeth Barrett Browning           Robert Browning
Robert Browning was born on May 7, 1812, in Camberwell, England just a suburb of London. The first born of Robert and Sarah Anna Browning. His father was a clerk at the Bank of England forgoing the fortune of his own father by refusing to work at a sugar plantation which was a farmed by means of slavery. Even on his modest salary he was able to marry, raise a family, and to acquire a library of 6000 volumes. He was an exceedingly well-read and self-educated man. And it though this vast library of books that the young poet would receive his education. Robert was an extremely bright child and an avid reader and took it upon himself to learn Latin, Greek, French and Italian by the time he was fourteen. He attended the University of London in 1828, but left in discontent to pursue his studies by reading at his own pace. His extensive education has led to difficulties for his reader’s; he did not always realize how obscure his references and allusions were.

It was his reading of Shelly in 1826 that made the profoundest impression on him. Robert took up both vegetarianism and atheism for a brief time imitating the poet he so admired. Though this did not last the determination to be poet or nothing did and Robert Browning set out to make his mark as such. In 1833 he published his first poem Pauline, funded by his aunt. The poem was taken to be seen as highly autobiographical and morbidly confessional, not one copy was sold. John Stuart Mill did however have his opinion on the piece and wrote in the margins “With considerable poetic powers, the writer seems to me possessed with a more intense and morbid self-consciousness than I ever knew in any sane human being.” Though the words were taken to heart, Robert Browning would come to believe if poetry is not to be autobiographical, a giveaway, it must be dramatic. Browning vowed that his poetry would be “dramatic in principle and so many utterances of so many imaginary persons, not mine”.

For short while after the failure of Pauline, Browning took to writing plays but his true passion surfaced within a few years and in 1841 he began publication of eight pamphlets which would be called Bells and Pomegranates. And though the reviewers greeted the poems as “justly mild”, there was one reader who would prove to have more influence on Robert Browning than any reviewer. In 1844 Elizabeth Barrett wrote of Browning’s poems in a poem of her own Lady Geraldine’s Courtship paying tribute to a fellow-poet:

“Or from Browning some pomegranate which,
if cut deep down the middle,
Shows a heart within blood-tinctured of a veined humanity”

Browning wrote a letter to Barrett thanking her for her kind word, it was this mere tribute and thank you that would usher in one of the greatest romances in of the 1900 century.

Elizabeth Barrett Barrett was born on March 6th, 1806 six years the elder of Robert Browning, she would always be conscious throughout her life as being the older of the two. Her poetic celebrity also preceded Browning’s publishing successfully in 1838 The Seraphim and other Poems. Browning had read Elizabeth’s poetry and began corresponding with her complimenting her on her writing, until he was bold enough to ask to meet her personally. This proposition was to be more dramatic than a mere meeting between man and woman, for Elizabeth being the eldest of 12 children whose mother had died when she was in her early twenties was also considered an invalid and had become a recluse in recent years. Also her father made it known that he forbade any of his children from marrying and would disown any that did. Elizabeth loved her father and new that he felt it was his solemn duty to control and protect his children, but even this love could not stop her from meeting and loving Robert Browning. The meeting would be a very delicate matter indeed, but on May 20th, 1845 the meeting took place for a short time as not to tax her strength, but it would be the first of many that would take place secretly, along with the passing of letters that in themselves are poetry to the ears of any reader..

During this forbidden courtship, Barrett would produce what some consider her finest work Sonnets’ from the Portuguese written to and about Browning, though he never read them until after their marriage. It is known that his love for her saved her and breathed new life into her frail body.

My letters! all dead paper, ... mute and white ! —
And yet they seem alive and quivering
Against my tremulous hands which loose the string
And let them drop down on my knee to-night.
This said, ... he wished to have me in his sight
Once, as a friend: this fixed a day in spring
To come and touch my hand ... a simple thing,
Yet I wept for it! — this, ... the paper's light ...
Said, Dear, I love thee; and I sank and quailed
As if God's future thundered on my past.
This said, I am thine — and so its ink has paled
With lying at my heart that beat too fast.
And this ... O Love, thy words have ill availed,
If, what this said, I dared repeat at last!

Elizabeth Barrett was 40 years old, Robert Browning was 34 when they secretly married on September 12th, 1846 at St. Marylebone Church, and seven days later they secretly left the country. They would have 15 tender years of marriage, one child, a son Robert Weideman Barrett Browning (called Pen) born to Elizabeth at the age of 43. Then on June 29th, 1861 at the age of 55 Elizabeth Barrett Browning died in the arms of her husband. In a letter to his sister Browning writes;

-the last, I saw. I felt she must be raised, took her in my arms, I felt the struggle to cough begin, and end unavailingly – no pain, no sigh, - only a quiet sight. Her head fell on me. I thought she might have fainted, but presently there was the least knitting of the brows, a A. cried “Quest’ anima benedetts e’ passata!” .. It is so. She is with God,… 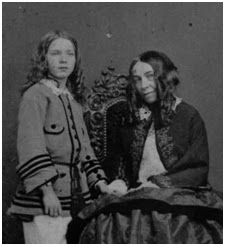 Elizabeth Barrett-Browning is buried in the English cemetery in Piazzale Donatello, Florence, Italy. Public sympathy for Robert after her death helped the critical reception of his Collected Poems (1862) and Dramatis Personae (1863). The Ring and the Book (1868-9), based on an "old yellow book" which told of a Roman murder and trial, finally won him considerable popularity. He and Tennyson were now mentioned together as the foremost poets of the age. Although he lived and wrote actively for another twenty years, the late '60s were the peak of his career. His influence continued to grow, however, and finally lead to the founding of the Browning Society in 1881. He died in 1889, on the same day that his final volume of verse, Asolando, was published. He is buried in the Poet’s Corner of Westminster Abbey in London, England. He wanted to be buried next to Elizabeth but by the time he died the city was not allowing any more burials. 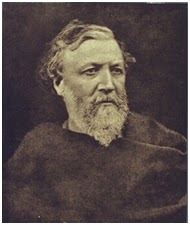 Life in a Love: Robert Browning

Room after room,
I hunt the house through
We inhabit together.
Heart, fear nothing, for, heart, thou shalt find her,
Next time, herself! -not the trouble behind her
Left in the curtain, the couch's perfume!
As she brushed it, the cornice-wreath blossomed anew, -
Yon looking-glass gleamed at the wave of her feather.

Yet the day wears,
And door succeeds door;
I try the fresh fortune -
Range the wide house from the wing to the centre.
Still the same chance! she goes out as I enter.
Spend my whole day in the quest, -who cares?
But 'tis twilight, you see, -with such suites to explore,
Such closets to search, such alcoves to importune

This wonderful piece on Elizabeth Barret and Robert Browning was written by bkmackenzie, a regular contributor to Poets United. If you would like to learn more about bkm you can do so by by visiting her poetry blog Signed .....bkm.  bkm is a regular contibutor to Poet United an active particpant in most activities found here at Poets United.  If you enjoy reading bkm's work please stop back in to see her some or latest contibutions.
Posted by Poets United