Classic Poetry - "I look into my glass" by Thomas Hardy 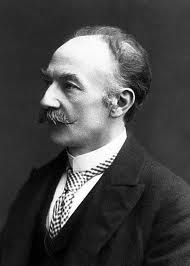 Thomas Hardy (1840-1928)
I LOOK INTO MY GLASS
I look into my glass,
And view my wasting skin,
And say, “Would God it came to pass
My heart had shrunk as thin!”
For then, I, undistrest
By hearts grown cold to me,
Could lonely wait my endless rest
With equanimity.
But Time, to make me grieve,
Part steals, lets part abide;
And shakes this fragile frame at eve
With throbbings of noontide.
Thomas Hardy (2 June 1840 – 11 January 1928), an English novelist and poet, considered himself a poet who wrote novels to make a living. Despite this personal distinction, throughout his lifetime he was best known for his novels, including Tess of the d'Urbervilles and Far from the Madding Crowd, which earned him a reputation as one of the world’s great novelists.
Like most writers, Hardy drew details from his personal experience to bring life to his written work. The Dorchester region of England, where he grew up, provides the setting and backdrop for most of his fictional pieces. He then populated these places with characters struggling against their personal natures or social circumstances.
Hardy's poetry, first published when he was in his fifties, ultimately grew to be as well regarded as his novels and significantly influenced modern English poetry. In the 1950’s and 1960’s, a group of English poets collaborated to create “The Movement” and cited Hardy as a major figure, firmly establishing his poetic reputation.
Posted by Unknown