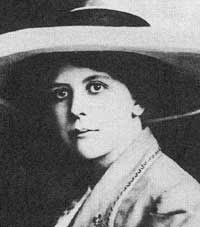 Life is a stream
On which we strew
Petal by petal the flower of our heart;
The end lost in dream,
They float past our view,
We only watch their glad, early start.
Freighted with hope,
Crimsoned with joy,
We scatter the leaves of our opening rose;
Their widening scope,
Their distant employ,
We never shall know. And the stream as it flows
Sweeps them away,
Each one is gone
Ever beyond into infinite ways.
We alone stay
While years hurry on,
The flower fared forth, though its fragrance still stays.

Amy Lowell (1874-1925), American Imagist poet, was a woman of great accomplishment. She was born in Brookline, Massachusetts, to a prominent family of high-achievers. Her environment was literary and sophisticated, and when she left private school at 17 to care for her elderly parents, she embarked on a program of self-education.

Her poetic career began in 1902 when she saw Eleonora Duse, a famous actress, perform on stage. Overcome with Eleonora's beauty and talent, she wrote her first poem addressed to the actress. They met only a couple times and never developed a relationship, but Eleonora inspired many poems from Amy and triggered her career.

a collection of Amy Lowell's poems
Posted by bttrflyscar