Classic Poetry - "The Road Not Taken" by Robert Frost 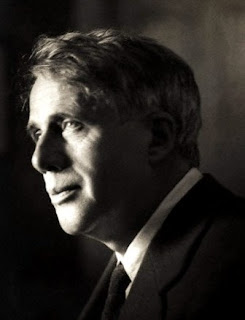 And sorry I could not travel both

And be one traveler, long I stood

And looked down one as far as I could

To where it bent in the undergrowth;

Then took the other, as just as fair,

And having perhaps the better claim,

Because it was grassy and wanted wear;

Though as for that the passing there

Had worn them really about the same,

And both that morning equally lay

In leaves no step had trodden black.

Oh, I kept the first for another day!

Yet knowing how way leads on to way,

I doubted if I should ever come back.

I shall be telling this with a sigh

Two roads diverged in a wood, and I--

I took the one less traveled by,

And that has made all the difference.

Robert Frost (1874-1963) was born in San Francisco, California and moved to Lawrence, Massachusetts when his father died in 1885. He graduated from high school and attended Dartmouth College for a few months in 1892. He also studied at Harvard, but never received a degree. Over the next ten years he held a number of jobs including hourly work at a textile mill and teaching Latin, ultimately running his own New Hampshire farm. In 1894 Frost's poem “My Butterfly” was published in The New York Independent, the first of several to appear in various magazines. In 1895 he married Elinor White, with whom he had six children.

In 1912 Frost sold his farm and took his wife and family to England. He published his first collection of poems, “A Boy’s Will” in 1913, and then “North Boston” in 1914. The latter gained international attention and contained some of his best-known poems including “Mending Wall,” “The Death of the Hired Man,” 'Home Burial,” and “'After Apple-Picking.”

Frost and his family returned to the US in 1915 and bought a farm in New Hampshire. In 1916 he became a member of the National Institute of Arts and Letters and published his third poetry collection, “Mountain Interval,” which included “The Road Not Taken,” “Birches” and “The Hill Wife.” He continued to work and write for nearly fifty more years.

An oft-lauded poet, Frost was elected to the American Academy of Arts and Letters in 1930. Amherst College appointed him Saimpson Lecturer for Life in 1949, and in 1958 he was made poetry consultant for the Library of Congress. He was honored with tributes from the U.S. Senate (1950), the American Academy of Poets (1953), New York University (1956), and the Huntington Hartford Foundation (1958); and he received the Congressional Gold Medal (1962) and the Edward MacDowell Medal (1962). He participated in the inauguration of President John F. Kennedy in 1961, reciting two of his poems. In 1962 he traveled in the Soviet Union as a member of a goodwill group. At the time of his death on January 29, 1963, Frost was considered a kind of laureate of the US.