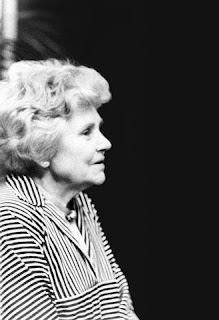 The art of losing isn't hard to master;
so many things seem filled with the intent
to be lost that their loss is no disaster.

Lose something every day. Accept the fluster
of lost door keys, the hour badly spent.
The art of losing isn't hard to master.

Then practice losing farther, losing faster:
places, and names, and where it was you meant
to travel. None of these will bring disaster.

I lost my mother's watch. And look! my last, or
next-to-last, of three loved houses went.
The art of losing isn't hard to master.

I lost two cities, lovely ones. And, vaster,
some realms I owned, two rivers, a continent.
I miss them, but it wasn't a disaster.

--Even losing you (the joking voice, a gesture
I love) I shan't have lied. It's evident
the art of losing's not too hard to master
though it may look like (Write it!) like disaster.

Born in Worcester, Massachusetts in 1911, Elizabeth Bishop, whose father died and mother became ill when she was very young, spent her childhood living in Nova Scotia with her grandparents and in Boston with her aunt. She described her happy childhood as a time during which she was treated kindly, like a guest.

A good student, Bishop graduated from Vassar with a degree in English. During her time there, she worked on the school newspaper, The Vassar Miscellany and co-founded a literary magazine, Con Spirito. After college she traveled throughout Europe, and then lived in New York City, Key West, Florida, and, for seventeen years, in Brazil. She taught at the University of Washington, Harvard, New York University, and at Massachusetts Institute of Technology.

In addition to teaching and writing poetry, Bishop translated a famous Brazilian diary, The Diary of Helena Morley, edited and partially translated An Anthology of Contemporary Brazilian Poetry, and wrote prolifically for The New Yorker. She received two Guggenheim fellowships as well as honorary degrees from Adelphi, Brandeis, Brown, Dalhousie, Princeton, Smith and Amherst Colleges. A chancellor of the Academy of American Poets, Bishop was also a member of the American Academy of Arts and Letters and a consultant in poetry to the Library of Congress in 1949-50. She died in 1979.