Life of a Poet - Peggy Goetz

Kids, I have a wonderful read for you today. From the time I first saw Peggy Goetz’s Africa Unfinished site, and her glorious photos of the time she spent in Africa, I have had her in mind for an interview. And today’s the day! Yippee!…….Africa………..pour something cold and delicious, with ice cubes, and let’s dive in! You’ll find Peggy, on any given day, at On A Day Like Today!! And she lives an extremely interesting life.

Poets United: Peggy, so nice of you to agree to this interview - especially as you are traveling while we're conducting it! Would you like to tell us a bit about your life? 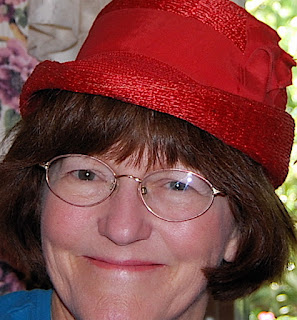 [Peggy, "trying not to be too serious about these photos!"]

Peggy: I always think I have lived quite an ordinary life. But I have come to realize that we almost all think our lives are ordinary, and that really there is a story in every life, if one stops to listen.

I write almost every day. Even though I may appear to have my head in the clouds, I go through my days with my eyes and ears open.  I ask questions and think about why things are the way they are. As I do so, I store away impressions and ideas for later use. Writing and poetry is always in my mind, and I have a small notebook that I carry with me to note things that catch my eye or ear, that might lead to a poem.

My husband, Steve, and I have been married 40-plus years. We have lived in Irvine, south of Los Angeles, in the same house for nearly that long, except for a couple opportunities to live and travel overseas. Our two grown children, Bryan and Anna, live in northern and central coast California. And we have one grandson, Peter. We also dote on our large boxer-mastiff mix dog.

[Peggy, second from right with family, "on one of our travel adventures" : husband on right,
son and fiancee in middle, daughter and grandson on left.]

Poets United: What a great family, Peggy. And married 40 years! Not many can say that any more. Way to go!

Peggy: After working in quite a few jobs, including university medical research and mental health, I settled in journalism and worked for my community paper as a reporter and feature writer for more than 16 years. Since leaving there in 2006, I have done some freelance prose writing, but have mostly concentrated on my poetry.

I grew up in California in an academic family, both of my parents being in the sciences. I attended the University of California, Irvine, and got a bachelor's degree in psychology and a master's degree in social ecology.

Poets United: And what took you to Africa, Peggy?

Peggy: In January 2006, one morning I was having a bad day at the newspaper office, and I got a call from a friend who headed a project helping children impacted by AIDS, in a community in South Africa. She wanted me to come that summer and write about the project and the people there.  On impulse I said, "yes."  I took a leave from my job, though I wrote stories for the paper while I was gone. 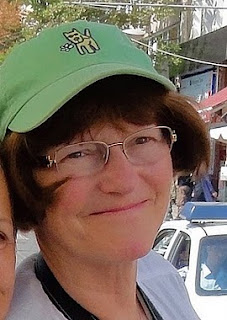 I traveled with my husband to Nkandla, Kwalzulunatal, in central South Africa. He stayed only two weeks but I spent six weeks, living in a convent and working with the project. I definitely got a non-tourist view of life in an area with one of the highest rates of HIV in Africa—40 percent of people between 20 and 50. The kind of rural poverty was unlike anything I imagined and the HIV question so much more complex than I had anticipated. We assisted at an orphanage, a health care outreach program and a high school where many students had been orphaned or impacted by AIDS. (Check out the Africa Project at http://www.theafricaproject.com/).

I wrote extensive journals and some stories for my newspaper and its parent newspaper. The experience changed my view of the world and life.  I also took many photographs. 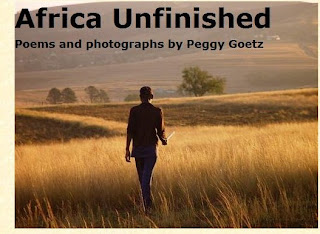 Over the next couple of years I wrote poetry about the experience and in 2010 published my book of photos and poems, "Africa Unfinished" . (To purchase my book, contact me at peggan@aol.com.)

Poets United: Such an amazing experience,  and one I would so dearly love to have myself. The AIDS situation there is beyond anything we North Americans  can comprehend.
So, Peggy, when did you begin writing creatively?

Peggy: I always liked writing and it came easily to me. My father was a writer of scientific books and editor of scientific journals,  and I think I inherited his ease with writing. I recall my parents reading poetry to me in childhood, particularly my Dad, from "The Birdie with the Yellow Bill" to the "Rhyme of the Ancient Mariner" and "Under the Spreading Chestnut Tree."

However, my first academic brush with poetry really quashed any interest I might have had in pursuing it for a very long time. It was a university class on 20th Century poetry and I was totally at sea, though I was more at ease in other English classes. My study at the university concentrated on math-oriented social science.

When my kids were very young, another stay-at-home-mom and I decided to pursue our love of writing and wrote a humorous column on parenting for a small local magazine.

After a variety of part-time jobs in medical research, mental health and teaching, in mid-life I decided to look for a new direction and ended up as a reporter and feature writer at our community newspaper. The pay was low, but I loved my job. [Skywriters, from all over the US, meeting in Palm Springs last year.
Peggy third from right in green sweater. To Peggy's right are our own Poets United
members Diane Truswell and Mary Kling.]

A real turning point for me, was about 12 years ago, when I became part of the Skywriters, an online writing group from all over the country.  My fellow writers encouraged me to try writing poetry and my poetic self was born, as I discovered free verse.  I found great joy in expressing myself concisely and in small glimpses without the paralyzing-for-me boundaries of form and rhyming.  I have continued with my writing group and count the participation with these friends as a central part of my life now. A couple of years ago, at the urging of some of these friends, I discovered the world of blogs and the online poetry community, including Poets United. That community has given me another great boost for my love of writing poetry.

Poets United: I so know what you mean! It is a wonderful community! How would you describe your approach to the creative process? Where do you go for inspiration?

Peggy: I am not a person who likes doing things the same way repeatedly; consistency is not my strength. So, as you might expect, my approach to writing also varies.  However, I do find that most of the time I start with a broad idea from a prompt, or something I feel or see going through my days. I guess my main place to go for inspiration is into the nooks and corners of my own mind. I can be inspired by many things, including reading poems or even novels, or the newspaper and nonfiction, or by looking at photos or films—all kinds of ways of looking at life.  And there is always my notebook of ideas and words I have liked.

When I do start to write, I just sit in front of the computer and begin. Starting out, I generally do not have much idea where it will go. Very often I come up with an ending or conclusion that is a surprise to me. 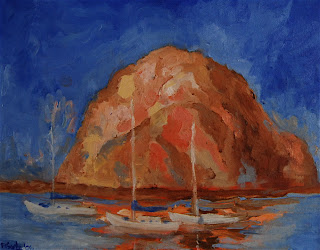 This was also my basic approach to writing stories for the paper and for doing oil paintings and other creative things I enjoy. Sometimes it flows and sometimes it does not, of course, but often it goes someplace I do not expect.

My work is never really finished. Mostly it is finished when the clock says it has to be, but further changes are always possible.

Poets United: That sounds great, Peggy. Who would you say has been the greatest influence on your writing?

Peggy: Certainly my participation in my writing group for the past 12 years is the greatest influence and inspiration for my writing poetry.  My father was also an influence, and I can still hear his way of putting words together in my work.  The various workshops on news writing and clarity of writing has also been a strong influence for me. 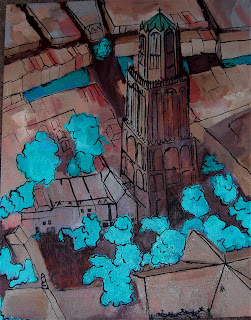 [Another fantastic oil painting by Peggy of Utrecht,
"when we lived in the Netherlands in 1987-88."]

I have had chances to travel around the country, and other countries, since I was a child, and traveled to Europe, Asia and the Middle East with my parents. My husband, kids and I lived in the Netherlands a year as part of an educational exchange program and visited other places as well. Camping and out-of-doors has also long been a part of my life. These chances to see and hear in so many other places has also colored my writing.

Poets United: It sounds like a full, wonderful, adventurous life! And far from "ordinary"! When you aren’t writing, or traveling, what other interests do you enjoy? 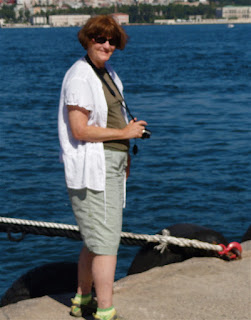 [Peggy in Istanbul,
"always the woman with the camera"] 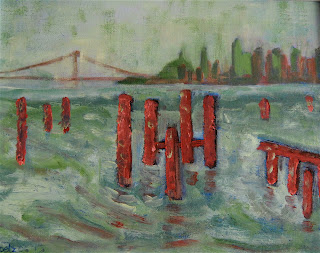 Poets United: Such a rich array of interests! Your paintings are wonderful! As are the photos you have taken, that make your blogs so vibrant and colorful. Peggy, final thoughts: what advice would you give someone who is just a beginner?

Peggy: Write every day. Write for yourself but find others to write with and share the journey. Don't stop if your family does not appreciate your work. Get involved in the online poetry community, as I think it is the future. Observe and listen carefully. Read.  Keep a body of your work in a safe place. Keep your day job.

Poets United: Ha ha, I love “keep your day job”! Peggy, it has been lovely hearing about your writing life, and the travel you have experienced. Makes me want to know more. (And be you in my next life!) Thank you so much for the visit!

See, folks? Isn’t it true that the people behind the pen are some of the most interesting folks around? Come back and see who we talk to next. Who knows? It might be you!
Posted by Sherry Blue Sky

Email ThisBlogThis!Share to TwitterShare to FacebookShare to Pinterest
Labels: Peggy Goetz, The Life of a Poet (Interviews)