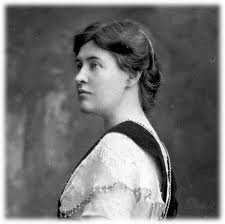 IN the tavern of my heart

Many a one has sat before,

And, departing, come no more.

When the night was cold without,

And the ravens croaked of storm,

They have sat them at my hearth,

Telling me my house was warm.

As the lute and cup went round,

They have rhymed me well in lay;--

When the hunt was on at morn,

Each, departing, went his way.

On the walls, in compliment,

Some would scrawl a verse or two,

Some have hung a willow branch,

Or a wreath of corn-flowers blue.

Ah! my friend, when thou dost go,

Leave no wreath of flowers for me;

Not pale daffodils nor rue,

Spill the wine upon the lamps,

Tread the fire, and bar the door;

So despoil the wretched place,

None will come forevermore.

At age 23, Willa Cather began her career as a writer at The Home Monthly, a women's magazine similar to Ladies Home Journal. A year later, she became an editor and drama critic for the Pittsburgh Leader and began contributing poetry and short stories to The Library. She also taught Latin, algebra, and English composition, ultimately becoming the local high school's English department.

In 1906 Cather moved to New York City, joining the editorial staff of McClure's Magazine. Six years later, McClure's serialized her first novel, Alexander's Bridge, which was followed by her famous Prairie Trilogy — O Pioneers! (1913), The Song of the Lark (1915), and My Antonia (1918). All three became both popular and critical successes. Cather ultimately authored twelve novels and eight poetry and short story collections.

Through the 1910s and 1920s, Cather was firmly established as a major American writer, receiving the Pulitzer Prize in 1922 for her novel One of Ours. In the 1930s, however, critics referred to her as a "romantic, nostalgic writer who could not cope with the present, “and accused her of "failing to confront contemporary life as it is." Discouraged by the negative criticism of her work, Cather became reclusive, destroying work and correspondence and forbidding anyone from publishing her letters.

If you have a keen interest, The Willa Cather Foundation runs a comprehensive website where "you can tour her home, read her work, visit her beloved Opera House, and shop the largest collection of books by and about Cather."