Life of a Poet ~ The Unknown Gnome

Kids, save this one for evening, as the light softly fades to twilight, put on some dreamy music, pour yourself a glass of wine and enjoy.....this time we are visiting The Unknown Gnome in Spain! AND it is a love story! A happy tale for those of us dreaming of love in Spain.........or  love anywhere! And the photos are a feast for the eyes. Uncork the bottle, pour a little glass, and let's see what's happening in Spain among the gnomes!

PU: TUG, wonderful to have this visit with you. Can you tell us a little about yourself, your family and your life in Spain, (so we can eat our hearts out :)?)

TUG: Well, I'm a retired Information Technology gnome, father of two grown children, my son Shawn and my daughter Shannon, and I'm married to my sweet Dulcina, aka Doña Eñe.
Dulcina and I live in the mountains of Cantabria. This is our view of Mount Porracolina. 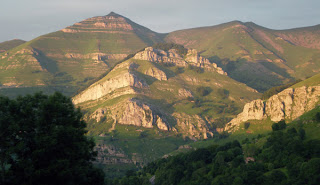 Our seventeen acre abode in San Roque de Riomiera lies in the heart of one of three Pasiego valleys. 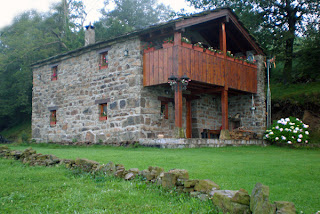 As for furry creatures, there are deer and fox about the hills but living in Pasiego country one will find the predominant beast to be the vaca. Goats, sheep, burros, horses and chickens are in abundance as well. 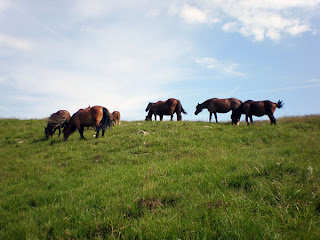 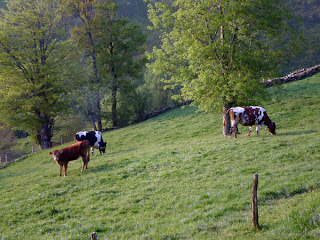 PU: What spectacular landscape! What led you to creating a blog? I love the name! Is there a story behind it?

TUG: My first time blogging was in the early days of MySpace after which I migrated to TagWorld before they switched to the processes they have today. TagWorld at the time was similar to MySpace. It was in TagWorld that TheUnknownGnome made his first appearance.

His moniker originated in a short unfinished poem I had started in August 2004.

It was in TagWorld that TheUnknownGnome met Dulcina in 2006 and the two of them became DulcinaandGnome. They can still be found in Wordpress, YouTube and Facebook. 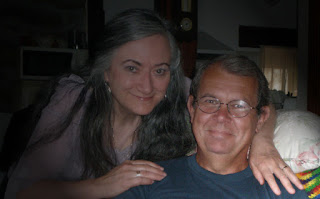 [The Fair Dulcina and one very happy gnome!]

A year after we settled in Cantabria, The UnknownGnome Poems blog was created, though it took another year and a half after that for me to make my first post. 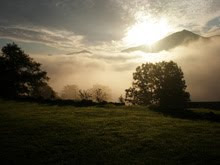 PU: It is so very lovely where you are! Breathtaking! How would you describe your personal approach to the creative writing process?

TUG: Words, syllables, silences, they constantly dance about me, all I need be is still and write what is given me. Solitude is my preference for writing, for most times I'm praying for words.

PU: Me, too! Who would you say has been the single biggest influence on your writing?

TUG: That would be my Dulcina. Her love and encouragement fills me with a passion to write a higher form of expression.

PU: That's so lovely.  Do you remember writing your first poem? If you wrote in high school, did the other boys give you a hard time?

TUG: I'm ashamed to say that I've been writing for 41 years now and that I am nowhere near where I should be as a poet, but maybe that's what poets are.

Yes, I remember my first poem, 1970, an affirmation of belief and love. It was titled "I enjoy simple things". I wrote it for my "first love", to whom I owe great thanks for having placed me on this poet's path. That was also my last year of high school and the boys didn't react because they never knew. 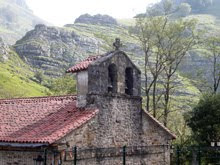 PU: You need not be ashamed of anything. You are a very fine poet! What led you to choosing the poetic form as your means of expression?

PU: Is there a time of day that works best for writing? How do you begin a piece of writing?

TUG: As I said earlier, I prefer being alone when writing.  The early hours pre-dawn
just as I wake are the most productive. A nice darkened room illuminated only by a computer monitor and a cup of coffee.

I don't consciously begin a piece of writing any longer. The words form themselves and I just act as a conduit. When I am conscious of writing though, it is in the assemblance or reassemblance of the words that have been previously formed. 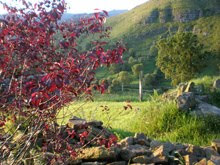 PU: How do you know when a poem is finished?

TUG: When nothing more comes, the song is done, then after a day or two of having set it aside, if it is coherent upon rereading, it is filed away.

PU: How do you know when a poem is 'good'? What is your personal criteria for good poetry, your own and others?

TUG: Word usage, syllabic rhythm, message or not. The ability to transport or transform the reader.

PU: Well said. What, most often, triggers you to write? Where do you go for inspiration? 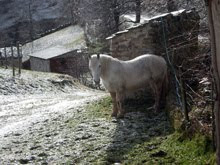 PU: And all of it right there, where you are! Is there a link between music and poetry for you?

TUG: Absolutely and I try to bring that out, though I'm not a musician.

PU: Do you have a favorite poem, written by you?

TUG: I can't bring to mind a favorite poem but here's a teaser:

in your orchid arms
away from orchestrated moments
of perfect purpose,
in the purr
of the passion
of the passing night,
there in that felicity
that simplicity
of being and not,
I am trinity kissed,
nakedly ordained
and blessed of you.

PU: Sigh.......how lovely.  Gnomes are so romantic! When you are not writing, what other activities do you pursue? 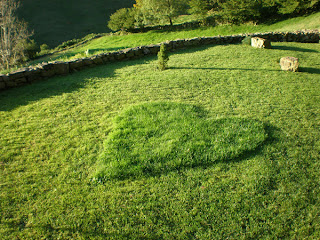 TUG: A lot of my time from March through October is taken up with grass cutting here in Cantabria. When that "joy" is not available, I hike around the hills. I also spend considerable time each day reviewing and often commenting on my followers posts. 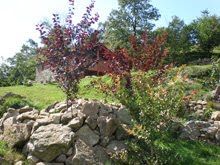 PU: I love the way you cut the grass! I can see  mowing is, indeed, a big Chore. But in such lovely surroundings! When you look back, is there a story or two that stands out for you? A great adventure? 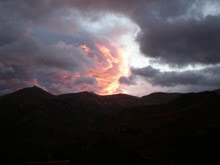 TUG: My whole life is a great adventure. I am thankful. Here's a little hillbilly livin' in Spain. Who'd a thunk it?!

PU: It shows us dreams are Possible.  (Dream big, kids!) Is there anything else you would like to share with Poets United?

TUG: I'd like to thank all of my followers for their support and encouragement, both those that comment and those that don't. I also want to mention several sites by name:

Moonlight and Dreamz - http://moonlightanddreamz.blogspot.com/ Thanks Celest, my MAD friend that gave me the name TUG! Sherry if you can fit it in your schedule please interview this wonderful MAD Doctor!

Dog Ears & Footnotes - http://dogearsandfootnotes.blogspot.com/ I can't forget you Rose! You keeps me straight.

From the Heart Online - http://www.fromtheheartonline.net/ Kim, thanks for your encouragements.

In the Corner of My Eye - http://inthecornerofmyeye.blogspot.com/ Thank you Mary.

This is Me! - http://kizunakk.blogspot.com/ June, I can't forget you my Butterfly. 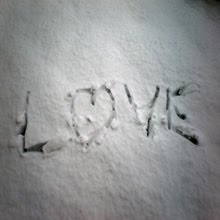 Sherry, I thank you for this interview, it has been a real pleasure and it is an honor to be here on Poets United.

PU: It has been a pleasure, indeed, and a story that is good for my tired old heart. Thank you so much, for this interview, and for being part of Poets United.

See, kids? Didn't I tell you this was going to be fun? One more terrific story, one more wonderful life, one more amazing poet. It is so true that the people behind the pen are some of the most interesting folks around. Come back to see who we talk to next. Who knows? It might be you!

Email ThisBlogThis!Share to TwitterShare to FacebookShare to Pinterest
Labels: Steve Sullivan, The Life of a Poet (Interviews), The Unknown Gnome, The Unknowngnome