Jewish-Australian Leah Kaminsky (a Melbourne girl) married an Israeli and lived with him in Haifa for 11 years, during which time their three children were born. Situations like that described in this poem eventually influenced them to resettle in Australia.

A poem for Alon on his eighth birthday

And so this is a poem for you
although you write it yourself
every day
when you look for your soccer ball
and kick it around the house
last month, you broke an antique plate

I want to stop you now
keep you close, bound to me
watch you play Aussie Rules
delete from your lexicon
intifada, bomb shelter
gas mask, dead baby

for your birthday I would stop the sirens
that call the whole country to attention
drivers on the freeway, stand beside their cars
a minute’s silence
in memory of all the eighteen year old
soldiers killed

from Stitching Things Together, Brisbane, Interactive Press, 2010. This volume of poetry is available in a Kindle edition, a Google ebook, and in print. 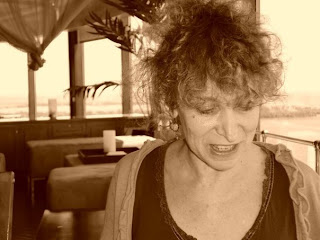 An award-winning writer, Leah is also a doctor in general practice. She has written and edited a number of books, both medical and literary, and sometimes both together in volumes of stories by medical doctors who are also writers. (And she is mother to three children. Wherever does she find the time for it all?) Details are on her website which will also lead you to some of her short prose writings and a couple of other poems, as well as an excerpt from a novel in progress.

Email ThisBlogThis!Share to TwitterShare to FacebookShare to Pinterest
Labels: A poem for Alon on his eighth birthday, I Wish I'd Written This, Leah Kaminsky, Stitching Things Together