Upriver with the tide behind us
Close to the outlet of the gorge:

No problem, except when somebody's
Plastic leggings, floating under water,

Twisted round the propellor. That same afternoon,
Lying down flat after lunch, I heard

The young unhappy married man
Who would have hated this place—ah well,

Space is what I love! The three selves dance
In the great eddy below the Taieri bridge,

And I am glad to leave them, sprinkling water
Over the embers that heated the Thermette,

And carrying like salt and fresh inside me
The opposing currents of my life and death. 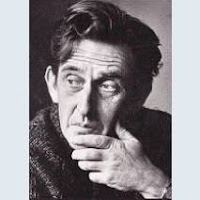 Well, the gender's wrong for me to have written it, but that only matters in verse six. I grew up by a river, one with a gorge, and spent a fair bit of my youth messing about in boats. It wasn't a tidal river; I lived by one like that much more recently. In fact most of my life has been spent by one river or another.

More details of his life and his poetics are here. I first fell in love with his work years ago, via a NZ friend's copy of his Collected Poems. You can buy a new edition of that here. Though he was a prolific poet, I can't find much online, but have a look here and here.

Email ThisBlogThis!Share to TwitterShare to FacebookShare to Pinterest
Labels: I Wish I'd Written This, James K. Baxter