This moment is all we have.
Someone told me that, but—

What is a moment?
When is it?
What is it made of?
How can you separate one
from another?

Don't we have memories
that change meaning with the wheeling light?
Don't we have visions that draw us on
dark as a speck of bird in the shifting clouds?

If there is only this moment
where would the river be
the river's rise
the sea?


I realise I was remiss last week and should of course have chosen a woman poet to celebrate International Women's Day. However I have a wonderful woman poet for you this week. As this was set up ahead of time, the poem I've selected is not specifically feminist, but universal. 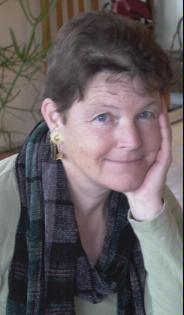 I like it because I get impatient with mindless parrotting of New Age notions, turning them into slogans and sound-bytes. (Yes, I do it too, but at least when I share things on facebook that sound good, I will add some comment suggesting they are food for thought rather than infallible pronouncements.) The idea that this moment is all we have is profound, but is probably meant to encourage reflection and lead to deep insights rather than to be trotted out glibly or serve as an excuse for self-indulgence.

This poem raises thoughtful questions which reclaim the validity of our experience and its continuity, and respect the patterns and progressions of the natural world. The language is simple and serious, and cuts deep. With great economy and lack of fanfare, Cunningham brings her environment to life, full of sensual detail.

The questions are rhetorical, and the implied conclusions certainly compel my agreement!

As a professional Tarot reader and teacher, it's not surprising I'd like the book this poem comes from. But the poems — obviously— are not descriptions of the cards but musings inspired by the energies they represent. They are grouped according to some of the Major Arcana cards, but not all of them, and not in Tarot order. She takes us on her own journey through the archetypes. The piece above is associated with the Judgment card, which is the last section in the book. Every poem in the book is a treasure, and I'd like to have written them all.

The link on her name, above, takes you to the About page of her website. The Home page lists her as Author, Poet, Musician, Counsellor. She is probably best known for a series of novels called The Maeve Chronicles. All her books may be found on her website, including another volume of poetry, Small Bird, which is now on my must-get list. You can also find several very interesting articles about her writing. And there are more poems!


Poem and photo are subject to copyright and are used with Ms Cunningham's permission.

Email ThisBlogThis!Share to TwitterShare to FacebookShare to Pinterest
Labels: Elizabeth Cunningham, I Wish I'd Written This, Wild Mercy