Evening News: This is How to Kill a Polar Bear
By Kelvin S. Mangundayao

first:
perform the 'Human' acts, twenty-four/seven;
skyrocket excess emitted pleasure;
then settle down, turn on the TV, and
watch, watch, watch
a white-fur-coated skin
(poor image of an Arctic king)
trying to survive on the melting ice floes. 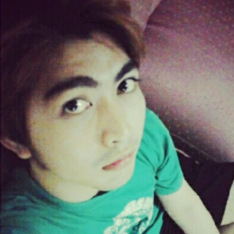 Powerfully succinct, don't you agree? And unpredictable, which I always like. Yet, when I finished reading it, there seemed no other way to say it.

I think it's good to use our poetry for this kind of commentary. Does it — can it —have any real effect? Perhaps we can't know. If it makes even one person think, that might be sufficient reason for doing it. What we can know is that keeping silent on such issues is guaranteed to make no difference. Luckily this poet is not likely to keep silent on any subject that engages him!

I encountered Kelvin (who blogs as Kelvin S.M. because he feels his surname is long and not easy to remember) at dVerse Poets Pub, a community somewhat like Poets United, where he is a staff writer contributing a regular segment on 'Poetics'. A new poet who has only been writing a few years, Kelvin is also an artist, whose artworks have been used as inspirations for his fellow participants at dVerse. Do have a read of the poetry at his blog. When he's not being an activist in verse, Kelvin is often writing highly romantic poems — and don't we all love a bit of romance? However he has many subjects, and is adventurous enough to try all sorts of forms and approaches.

Kelvin lives in the Philippines and is writing his poems in English. I think this is both brave, as it is not his first language, and intelligent, in terms of finding a wide readership.  He says:

I used to run an old poetry blog under the pen name: 'Window Lad' which is now defunct. The 4-year-old blog was deleted due to lost of inspiration to write and some other personal conflicts that normally comes to life. For more than half a year i didn't write anything nor engage myself in any online activities and it was only late November last year when I decided to make a come back and, yes, with a new poetry blog hoping to sink my feet back on the ground but this time deeper, i think. I have never been published (though it's ok since i'm only 21 and still will have to come a long way before getting into 'publishing' thing..hehe..) but has already started making submissions of some of works both in local & foreign publishing co...

I expect we'll be hearing a lot more of him in future.