I imagine this midnight moment's forest:
Something else is alive
Beside the clock's loneliness
And this blank page where my fingers move.

Through the window I see no star:
Something more near
Though deeper within darkness
Is entering the loneliness:

Cold, delicately as the dark snow
A fox's nose touches twig, leaf;
Two eyes serve a movement, that now
And again now, and now, and now

Sets neat prints into the snow
Between trees, and warily a lame
Shadow lags by stump and in hollow
Of a body that is bold to come

Across clearings, an eye,
A widening deepening greenness,
Brilliantly, concentratedly,
Coming about its own business

Till, with a sudden sharp hot stink of fox
It enters the dark hole of the head.
The window is starless still; the clock ticks,
The page is printed. 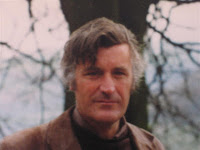 Ted Hughes was a prolific poet, considered a major English poet of his era, and was the British poet laureate from 1984 until his death. He also wrote prose (both fiction and non-fiction) plays, books for children, and translations. I like his nature poems best — but this, which I like best of all, has a touch of mystery and even mysticism taking it beyond a straightforward nature poem. On one level it describes a psychological state, but is something more than that too. In his book Poetry in the Making, the transcript of a series of poetry programs on radio which he did for schools, Hughes recounts having had several years of writer's block when suddenly this poem appeared from nowhere ... as the poem itself describes.
He became a controversial figure after the suicide of his wife Sylvia Plath, from whom he was separated at the time. Many of Path's admirers blamed him for her death. I am an admirer of Plath, and one of the numbers who think her incandescent poetry outshone her husband's — however I think that assigning him the entire blame for her suicide is an over-simplification which does little justice to either of them. In fact we have him to thank, as her literary executor, for ensuring the posthumous publication of her work, most of which would otherwise have remained unknown. He himself kept a dignified silence on the subject until the publication of The Birthday Letters, his poems about their relationship, shortly before his death from cancer, at a time when he must have known he was dying and evidently wanted to make public his side of the story at last. Many of the poems describe through his eyes incidents which Plath's poetry also described from a  different point of view. Being as immersed as anyone in the whole Plath mythology, it's impossible for me to know if The Birthday Letters could speak to any reader who didn't know the tragic story behind them.
But 'The Thought-Fox', which may be his most famous poem, can stand alone — beautifully.
You can find more of Hughes's poetry at PoemHunter.com  and there are six pages of his books at Amazon. He was also a keen environmentalist, as detailed in this article.

Email ThisBlogThis!Share to TwitterShare to FacebookShare to Pinterest
Labels: I Wish I'd Written This, Ted Hughes, The Thought-Fox