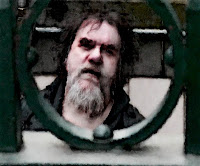 One of the many lasting friendships I made on MySpace through poetry was with Phillip Barker, aka Soma. We collaborated on running haiku and tanka groups there, and eventually moved them to Facebook. The poem I've chosen is in fact a tanka.

The tanka is one of my own favourite forms, often used for expressions of love and longing, and subject to fewer rigorous requirements than the (traditional) haiku. Contemporary tanka (and haiku) in English often dispense with syllable count; however this one, you'll note, keeps to the 5-7-5-7-7 rule.

Phill is a fellow Aussie and lives in Melbourne, a city I know well as I lived there more than 30 years myself — but that was before MySpace. We never ran across each other back then and still haven't met in person. Nevertheless he's a trusted and understanding friend, and the perfect collaborator as we share many attitudes and values.

An irreverent soul, serious about art, he tends to gather other poets around him in online communities where there is much hilarity, much jocularity, and also a genuine delight in celebrating each other's talent.

As well as a poet, he is a digital artist and a musician. His main blog, where you can find more of his poems, is called An Unauthorised Autohagiography. (He has a wicked, and self-deprecating, sense of humour). There are samples of his art accompanying the poems, worth admiring in their own right. You will also find links to his music, and to other places for viewing his artworks. But before you wander away from the poetry, look for the several pieces with audio. Phill has a wonderful, deep voice with a naturally caressing quality. It's a treat to hear him read.

You know I never leave you with just one piece if I choose a very short poem. So here is another sample of Phill's work.

excellent green tea!
and I'm OFF! to serve the ku.

water, gurgling over the falls
upstream — reluctant to come

leaves spiralling gently down
to race along the river

she paints her picture
he writes a final few lines
they retire, content.

a bell, fading quickly
still rings in my mind


... of which he says:  'A bit of explanation for them what likes the minutiae.  These stanzas are my part of a haiku / tanka cooperative write — right?'


And why did I choose these particular pieces, why would I wish to have written them? For their beauty! This musician also makes music with words.


(Note: He tells me he's a double-l Phill. I've made belated corrections.)

Email ThisBlogThis!Share to TwitterShare to FacebookShare to Pinterest
Labels: I Wish I'd Written This, Phillip Barker, Soma