The mower stalled, twice; kneeling, I found
A hedgehog jammed up against the blades,
Killed. It had been in the long grass.

I had seen it before, and even fed it, once.
Now I had mauled its unobtrusive world
Unmendably. Burial was no help:

Next morning I got up and it did not.
The first day after a death, the new absence
Is always the same; we should be careful

Of each other, we should be kind
While there is still time. 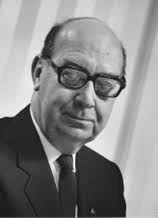 British poet Philip Larkin's work is often regarded as gloomy and cynical.  I admire the way he combines formal rhyme and metre with clear, down-to-earth language. It's the opposite of consciously 'poetic' language,  though in fact he is masterly at finding the right, fresh words. However I don't exactly love his poetry, and could not see myself writing with such pessimism.

But that's not all there is to him. The Mower confronts the facts head-on, as Larkin always appears to do; nevertheless it displays a tenderness which must have been part of the man, no less than his famous curmudgeonly persona. It's perhaps the only poem of Larkin's I'd like to have written — though I do also enjoy his most often quoted piece, This Be the Verse, which reveals his humour (albeit in this case a rather sardonic humour):

Larkin was a distinguished and innovative librarian, the author of two novels, and a respected critic of both literature and music. Although he produced only four slim volumes of poetry, he was so highly regarded that he was offered the position of Poet Laureate after John Betjeman died, but declined. He tended to steer clear of literary celebrity and said that he would like his poems to sound as if he was chatting to his mates in the pub.

He did, however, give readings of his work, some of which can be heard at his Poetry Archive entry.   Also he's on YouTube.

His biography at The Poetry Foundation discusses his poetics, and he was interviewed by The Paris Review.

All his books are still available on Amazon.

I'm grateful to him for being committed to making poetry accessible. In that, he was a major influence on 20th Century poetry.

Having written all that, I discover a wonderful article about him by Jacob Knowles-Smith in an earlier Poets United series, Poet History. This was written in December 2010. If, like me, you were unaware of it, do have a look. It covers material I don't, and I highly recommend it.