the relatives
the friends
who'd never be the same

we were breathless
in the high wind
of our secret

what a flirt
before the gorgeous breasts
of the crowd! 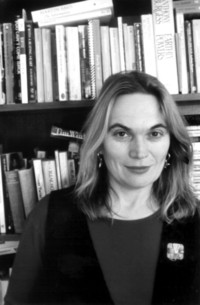 Dynamic, award-winning Australian poet Dorothy Porter died too young, from cancer, at 54, but left a fine body of unique poetry. The blurb from the posthumous Penguin volume, The Best 100 Poems of Dorothy Porter, says: 'Dorothy Porter was one of Australia's true originals, renowned for her passionate, punchy poetry and verse novels.'

The verse novels were very readable as stories. One of the first, the detective story The Monkey's Mask, was made into a film. She also wrote the libretto of an opera, Eternity Man, by composer Jonathan Mills, which was staged at the Sydney Opera House and later adapted into a 64-minute film. In addition, Porter wrote young adult fiction, libretti for chamber operas, and at the time of her death was collaborating on a rock opera with musician Tim Finn.

Her Wikipedia entry notes: 'Porter was an open lesbian and in 1993 moved to Melbourne [from Sydney] to be with her partner, fellow writer Andrea Goldsmith. The couple were coincidentally both shortlisted in the 2003 Miles Franklin Award for literature. In 2009, Porter was posthumously recognised by the website Samesame.com.au as one of the most influential gay and lesbian Australians.'

A fascinating interview from early in her career, republished at the time of her death, is largely about her poetic influences. It's well worth a read. (The rather startling photo featured is the cover illustration of her exciting first book, Little Hoodlum, published when she was 21.)

Google seems to be the best place to shop for her books. And you can read an extensive collection of her poems at Australian Poetry Library, along with a good, concise article about her life and work.

All her poems are wonderful, but with so many of them being part of full-length narratives, and others being rich with specifically Australian allusions, I looked for a piece that could stand alone and be accessible to all readers. I love its delicious joy and slight cheekiness, both qualities characteristic of her poetry.