There will be no Peace

Though mild clear weather
Smile again on the shire of your esteem
And its colours come back, the storm has changed you:
You will not forget, ever,
The darkness blotting out hope, the gale
Prophesying your downfall.

You must live with your knowledge.
Way back, beyond, outside of you are others,
In moonless absences you never heard of,
Who have certainly heard of you,
Beings of unknown number and gender:
And they do not like you.

What have you done to them?
Nothing? Nothing is not an answer:
You will come to believe - how can you help it? -
That you did, you did do something;
You will find yourself wishing you could make them laugh,
You will long for their friendship.

There will be no peace.
Fight back, then, with such courage as you have
And every unchivalrous dodge you know of,
Clear in your conscience on this:
Their cause, if they had one, is nothing to them now;
They hate for hate's sake.

This week we've been looking at bullying, with Timoteo's poem on the subject featured in 'I Wish I'd Written This' and again in Susan's Midweek Motif. Here in Australia we are being visited by Canadian spoken word poet Shane Koyczan with his bullying poem which was featured in an earlier 'I Wish I'd Written This'. (The link here takes you straight to the video.) I saw him interviewed on TV, saying how wonderful he finds it that bullied children everywhere are getting in touch, telling him how much that poem has helped them.

This poem of Auden's addresses a somewhat similar situation. He's the 'you' in the poem, which was written in 1956 about the resentment some people expressed at his appointment as Professor of Poetry at Oxford University. Obviously it hurt! Yet, like those other two poems, the writing arrives at a resolution. 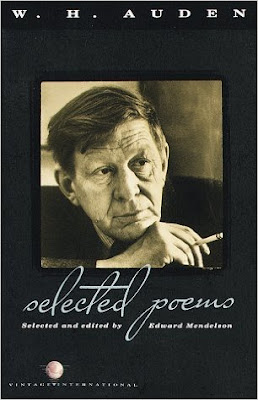 Wystan Hugh Auden, born and brought up in England, became an American citizen in 1946. He is considered one of the foremost poets of the 20th Century, who excelled in a variety of forms. If they know nothing else of his work, most people probably know the poem Funeral Blues which featured in the movie Four Weddings and a Funeral.

Wikipedia tells us: 'Auden published about four hundred poems, including seven long poems (two of them book-length). His poetry was encyclopaedic in scope and method, ranging in style from obscure twentieth-century modernism to the lucid traditional forms such as ballads and limericks, from doggerel through haiku and villanelles to a "Christmas Oratorio" and a baroque eclogue in Anglo-Saxon meters. The tone and content of his poems ranged from pop-song clichés to complex philosophical meditations, from the corns on his toes to atoms and stars, from contemporary crises to the evolution of society.'

Poetry Foundation says he 'exerted a major influence on the poetry of the 20th century' and that he 'was known for his extraordinary intellect and wit.'

The Academy of American Poets, of which he was a chancellor from 1954 to 1973, says he was 'generally considered the greatest English poet of the twentieth century' – but I think there are other contenders for that title (Yeats, Eliot) and it would be truer to call him one of the greatest.

As well as being a prolific poet, he was a prolific essayist and reviewer. He also collaborated in writing plays, opera libretti and documentary films. There are articles about his life and work at all the links I've quoted from. They comprise just a little of the material about him online, as you'll see if you Google. And of course there are many volumes by and about him at Amazon.

The best place to enjoy his poems online is probably YouTube. He has a wonderful reading voice!

Another thing Auden was famous for was his remarkably wrinkled, craggy face in old age, sometimes thought to be due to his heavy smoking. I found the real explanation on Samizdat Blog:

Auden had apparently been suffering since early manhood from Touraine-Solente-Gole syndrome in which the skin of the forehead, face, scalp, hands and feet becomes thick and furrowed and peripheral periostitis in the bones reduces the patient's capacity for activity.  There was no therapy for the syndrome, which does not affect either life expectancy or mental status, but which accounted for Auden's striking appearance of grave, lined melancholy.

The condition is inherited rather than contagious, and quite rare.