Yeah, Tankman!
They found him!

And now he’s found an agent
and done Oprah
and ghostwrote a bestseller
and they’re making the film
with Jackie Chan
and he’s putting his name
to a Revolutionary clothing brand
with a cute little tank logo, and …

It’s nice he didn’t die.
But I dunno, maybe
some things are best left
to the imagination
where they’re free to live
bigger, richer lives.

Like, I never want to know
who Jack the Ripper ‘really’ was,
would be happier if the Titanic
had been left to lie, undiscovered,
encrusting mystery in the depths
of the mind …

He’s big now, a ‘brand ambassador’.
Only careful what you wish for.
We wanted him and now he’s here –


This is a fantasy, of course – not the original incident, which was very real and widely witnessed, but Tank Man's current history as imagined by the poet. Wikipedia outlines the original event (too momentous, after all, to be called a mere 'incident') and makes it clear that the man's subsequent fate is unknown. 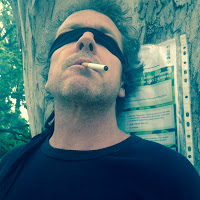 (I can't show you the famous photo as it is clearly subject to stricter copyright than covered by our usual disclaimer. However, the same Wikipedia article includes it if you would like to refresh your memory. Instead, this intriguing photo of Tug Dumbly perhaps makes a fitting statement.)

I came across this poem just before the US election, and then thought I couldn't include it here immediately, because everything political (and pretty much everything else too) would inevitably be seen through that filter at that time. In the aftermath, with the inauguration looming as I write, perhaps that still pertains; but I could wait forever – interest in the new US President is not going to go away – so I'm posting regardless.

I don't actually see this poem as political criticism, so much as social satire.

How stirring the first stanza is! And indeed, it was a heroic gesture. And what do we do with our heroes in today's world? We like to turn them into celebrities – not quite the same thing. And of course, many of our celebrities are not heroic at all but have other claims to fame, from genuine musical or sporting talent to big boobs or pots of money.

Some heroes are not admired at the time, perhaps quite the reverse. Whistle blowers risk imprisonment. One Australian of the Year earned widespread public opprobrium for daring to be proud of his Aboriginality. Even in this poem, the fictional celebrity of Tankman happens many years after his real act of heroism.

Then again, perhaps it is political commentary after all. Wheels coming full circle and all that. Revolutionaries, if they succeed, may become the next generation of tyrants ... or acquiescent advertisements for the status quo.

Well, those are some of the things it puts me in mind of. What does it say to you, I wonder? (I'd love to hear your responses in the comments.)

I've shared Tug Dumbly's work with you twice before in 'I Wish I'd Written This'. If it wasn't for my commitment to bring you a variety of poetic voices in my Friday columns, it could be a lot more. He keeps writing poems that absolutely blow me away.

To refresh your memory about his life and work, check details and links at this post.

Material shared in 'Thought Provokers' is presented for study and review. Poems, photos and other writings remain the property of the copyright owners, usually their authors.