A Poem on Hope

It is hard to have hope. It is harder as you grow old,
For hope must not depend on feeling good
And there is the dream of loneliness at absolute midnight.
You also have withdrawn belief in the present reality
Of the future, which surely will surprise us,
…And hope is harder when it cannot come by prediction
Any more than by wishing. But stop dithering.
The young ask the old to hope. What will you tell them?
Tell them at least what you say to yourself.

Because we have not made our lives to fit
Our places, the forests are ruined, the fields eroded,
The streams polluted, the mountains overturned. Hope
Then to belong to your place by your own knowledge
Of what it is that no other place is, and by
Your caring for it as you care for no other place, this
Place that you belong to though it is not yours,
For it was from the beginning and will be to the end

This knowledge cannot be taken from you by power
Or by wealth. It will stop your ears to the powerful
when they ask for your faith, and to the wealthy
when they ask for your land and your work.
Answer with knowledge of the others who are here
And how to be here with them. By this knowledge
Make the sense you need to make. By it stand
In the dignity of good sense, whatever may follow.
Speak to your fellow humans as your place
Has taught you to speak, as it has spoken to you.
Speak its dialect as your old compatriots spoke it
Before they had heard a radio. Speak
Publicly what cannot be taught or learned in public.

Found your hope, then, on the ground under your feet.
Your hope of Heaven, let it rest on the ground
Underfoot. Be it lighted by the light that falls
Freely upon it after the darkness of the nights
And the darkness of our ignorance and madness.
Let it be lighted also by the light that is within you,
Which is the light of imagination. By it you see
The likeness of people in other places to yourself
In your place. It lights invariably the need for care
Toward other people, other creatures, in other places
As you would ask them for care toward your place and you. 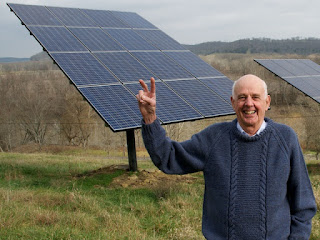 
'Wendell E. Berry (born August 5, 1934) is an American novelist, poet, environmental activist, cultural critic, and farmer. A prolific author, he has written many novels, short stories, poems, and essays. He is an elected member of the Fellowship of Southern Writers, a recipient of The National Humanities Medal, and the Jefferson Lecturer for 2012. He is also a 2013 Fellow of The American Academy of Arts and Sciences. Berry was named the recipient of the 2013 Richard C. Holbrooke Distinguished Achievement Award. On January 28, 2015, he became the first living writer to be inducted into the Kentucky Writers Hall of Fame.'

There is more about him there, and I learn that he was born in 1934, is a farmer, an environmental and anti-war activist, and a devout Christian who is not afraid to criticise the Christian churches when he perceives them to be failing in Christian ideals.

An article at Poetry Foundation says that, in any of his genres, 'his message is essentially the same: humans must learn to live in harmony with the natural rhythms of the earth or perish.' However, 'In his opinion, many environmentalists place too much emphasis on wild lands without acknowledging the importance of agriculture to our society. Berry strongly believes that small-scale farming is essential to healthy local economies, and that strong local economies are essential to the survival of the species and the well-being of the planet.'

Clearly he is thoughtful, committed, and lives his beliefs. This poem is sombre in its predictions, but if enough people were to take enough notice, could we change things in time? Some of the online petitions we sign, and the letters we send to our politicians, do get results. I think we must keep on keeping on. Recently I quoted on facebook poet Kerry O'Connor, whose writings many of you know and love, expressing the hope that, ''all will find inspiration to continue to be the voices of the people from all our many corners of the world' – a wonderful reminder of the possibilities of poetry. It's not the only way (nor even the only way for many of us poets) but poetry is OUR way. And Wendell Berry gives us a shining example.

There are lots of books by and about him at Amazon. At Poetry Soup you can find what are said to be his most famous poems; and there is also a collection at PoemHunter.

The photo used here is by Guy Mendes, released under Creative Commons.

Email ThisBlogThis!Share to TwitterShare to FacebookShare to Pinterest
Labels: I Wish I'd Written This, Wendell Berry