The Soldiers at Lauro

Young are our dead
Like babies they lie
The wombs they blest once
Not healed dry
And yet - too soon
Into each space
A cold earth falls
On colder face.
Quite still they lie
These fresh-cut reeds
Clutched in earth
Like winter seeds
But they will not bloom
When called by spring
To burst with leaf
And blossoming
They sleep on
In silent dust
As crosses rot 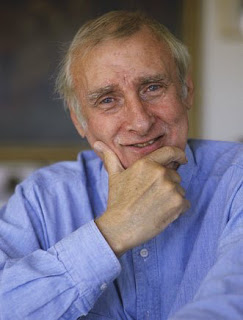 I was reminded by Sumana's recent Midweek Motif post, Mirror, that Spike Milligan – best-known as a brilliant comedian and one of the Goons – was also a poet. Most of his poetry is, as you might expect, comic, often written for children. But he suffered from severe depression at times, and in those times wrote more serious poetry.

The one I have chosen is a sad protest about soldiers dying young – because it is the young whom we send to war. Sadness can be beautiful, and I think this is a beautiful poem, even though a sombre one. (And do notice, what excellent rhyming!)

I say it is a protest, and yet his words do little but state the facts. There are very few emotive words or phrases, apart from 'babies' and 'too soon'; nevertheless the poem is full of emotion – I would even say, of horror. Although it is not stated outright, the final lines suggest futility. As my Dad used to say about distressing situations, 'It'll all be the same in 100 years.'

My Dad meant personal situations, and intended to be cheery; but Milligan seems to suggest that in the future our old wars will very likely turn out to have achieved little beyond the waste of young lives.

He himself experienced war first-hand. The Wikipedia account of his life informs us that he actually wrote seven volumes about his experiences in the Second World War, beginning with the memorably-named Adolf Hitler: My Part in His Downfall. He was in the artillery.

Before, during and after the war he was also a musician. Having started with the cornet, he became a jazz vocalist and trumpeter.

He was also a serious actor, a painter and a cartoonist. It's not hard to see why writer-producer-director Bernard Miles said of him:

... a man of quite extraordinary talents ... a visionary who is out there alone, denied the usual contacts simply because he is so different he can't always communicate with his own species ...

Barry Humphries, who once performed in a play with him, said afterwards that Milligan stole the show every night.

His poems, mostly humorous, can be found at PoemHunter, and he has an extensive Amazon page.

I have long owned Small Dreams of a Scorpion and Open Heart University, both of which contain brilliant short poems of black humour or just plain black, often with a touch of the surreal; along with his own strange and clever drawings, some cartoony, some weirdly beautiful and somewhat reminiscent of Aubrey Beardsley.

The photo used in this article is from Wikipedia, and is made available for fair use.
Posted by Rosemary Nissen-Wade