my tongue the forever probing
of appetite & never break

forever sweetly into
the chicken halves of intellect &
feeling 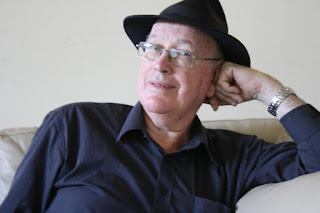 Rae was the first poet I chose for my Friday column at Poets United, back in October 2011. You can read that post here. It was 'I Wish I'd Written This', which was originally my only topic. The poem was a quietly beautiful ghazal which, like some of his others, might suggest death and dying, though not directly.

Now, Rae has recently become one of our 'living dead' and I choose to pay tribute to him with this poem, which is vibrant with life. I choose it for that reason.

Like a lot of others who knew him, I'm very sad Rae has gone – and just now I'm also quite cross with him for it. I don't want to post any of his death poems, no matter how brilliant they were. (Well, I suppose the Orpheus and Euridyce legend might suggest dying, but that's only a brief mention. The sensuality of this poem is what strikes me.)

I don't mean to imply that we were very close friends; there were others much closer. Although we knew each other for decades, and were aware of each other's work, it was only in recent years (thanks to the much-maligned facebook) that we started corresponding and reading each other's latest. And yet I viewed him as a good friend. There was an easy rapport between us, and I strongly suspect he had the gift of making everyone feel special.

He was a good friend to many: remembered as a poet, a teacher, and for a long period the Mayor of his municipality. The comments and reminiscences that poured in to his facebook page after the news of his death reiterated over and over again what a beautiful person he was. He had great generosity of spirit.

One of his death notices in The Sydney Morning Herald says:

Under the Outré Black Hat, the High Laugh, a Quiet Sense and Sensibility, a Brave and Gentle Gentleman.

The poetry, though, was often hard-hitting, looking squarely at life and people, including things we'd prefer not to see. And he could write very beautiful poems as well. (Many were both.)

You can read more about him on Wikipedia.

The publisher Puncher & Wattmann gives us this bio note:

Jones was born in Broken Hill in 1941, the son of a miner. He left school at 14 years of age and worked in a variety of manual occupations until he entered Sydney University in 1974 with WEA support. Since graduating from that University, he worked for some years in the then Commonwealth Employment Service where his industrial experience was extremely useful. He spent the last years of his employment working as a history teacher in the public education system.

The recent bio he wrote for a site called Red Room Poetry says, a little tongue-in-cheek:

Rae Desmond Jones is a poet much published in the olden days. His most recent book was Blow Out (Island Press, 2009). After many years spent in the wilderness of local government, including a period as the Mayor of Ashfield, a tiny Principality near Sydney, he has returned to poetry. He does not fear death half as much as being boring.

Well, he was never that! In witness of which, this site also features two of his poems which are so intense and surprising they'll knock your eyes out.

A few more of his poems appear at Poem Hunter. And there are others, including another lovely love poem, within this excellent review of his most recent book.

Another interesting review, of one of his last books, appears here.

He was a unique voice, and I agree with reviewer John Jenkins that he was a major Australian poet.

He has his own place in Australian poetic history, and not only for the quality of his work. Recently we had the 40th anniversary of the founding of the Poets Union of Australia – which was part of what has been called the Australian poetry revolution, when small magazines proliferated and performance poets took poetry 'off the page'. Rae was one of the early members of the Sydney Branch of the Union and a leading light in the revolution. In the 70s and 80s he and fellow-poet John Edwards edited an irregular, anarchic little magazine called Your Friendly Fascist – described by Edwards as 'a little mag with attitude'.

Edwards had further interesting things to say about it at the launch of The Selected Friendly Fascist in 2012, to the effect that it gave a voice to a modernism which was not recognised by more academic and establishment publishers. However, he continues:

But we had no agenda. If poets chose to write in rhyming iambic pentameter, that was fine – they too could go to the ball. But not many did. The iconoclasm of the 60s ensured that the Fascist would habitually flout the canons of good taste.

He notes that they managed to publish 'a lot of good stuff' even though they 'could not resist having a satirical dig at much of the pretentious crap that was the “hippie” version of poetry.'

Some of his books are out of print now, but you will find several on his Amazon page.

Material shared in 'The Living Dead' is presented for study and review. Poems, photos and other writings and images remain the property of the copyright owners, where applicable (older poems may be out of copyright)