I think I wanted to be
wings, the essence of wings
or a universal symbiote

As a child I climbed trees
and sang in the branches.
Feathers grew like leaves,

The lightline of horizon
funneled into my eyes,
expanded again inside,

splitting my mind like a robin’s egg.
Cracked but still singing I
took possession of the sky

Just past the first star
I grew aware of my blood
in its closed veins, a closed system.

Symbiosis had failed.
I was lonely as god
before the invention of colour

Space cold and pure
encapsulated me,
a virus in the universe.

an omen, for I shrank
into my body and beyond
into the warm thick cave of genesis.

to the whimpering womb,
that hollow mouth that never says Enough
until too late.

resembling lightning also.
Some day you will find
feathers and blood
on the inside of the window.

This poem speaks to me strongly, knowing how this brilliant poet’s life came to a sudden untimely end, through spousal homicide, just as her literary career was gaining ground. The image of those feathers on the inside of the window stays with me. 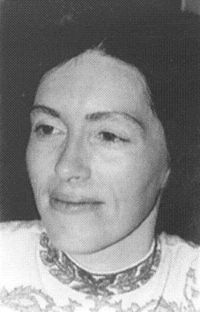 Pat Lowther, (1935 – 1975) was a gifted literary voice in Vancouver, B.C., in the early 1970’s. She chaired the League of Canadian Poets and was appointed to B.C.’s Interim Arts Board. She taught at the University of British Columbia.  Canada lost a powerful literary voice with her murder at the age of 40. But her work lives on. And every year in her honour, the Pat Lowther Award is granted to a book of poetry by a Canadian woman.

Two books and a portfolio of her poetry were published during her lifetime, four published post-humously.  A bibliography can be found here.  Time Capsule was published much later, in 1997, a compilation of her writings found in her son’s attic, years after her death. This book caused renewed interest in the poet’s life and work. Several books have been written about, or inspired by, her life, and a beautiful and haunting documentary entitled Water Marks was made.

The dam, built
by coolies, has outlived
its time; its wall
stained sallow
as ancient skin
dries in the sun
The spillway still
splashes bright spray
on the lion
shapes of rock
far down below
The dam foot
is a pit
for the royal animals
quiet and dangerous
in the stare
of sun and water

When the stones swallowed me
I could not surface
but squatted
in foaming water
all one curve
motionless,
glowing like an agate.
I understood the secret
of a monkey-puzzle tree
by knowing its opposite:
the smooth and the smooth
and the smooth takes,
seduces your eyes
to smaller and smaller
ellipses;
reaching the centre
you become
stone, the perpetual
lavèd god.

The sad and terrible thing about this poem is that Pat Lowther’s body was found in Furry Creek two weeks after her murder.

She left behind four children, two grown, Alan, and Kathy (now deceased), and two little girls, then nine and seven, Beth and Christine. Beth is an artist and Christine a poet, with a searing talent much like her mother’s, in my opinion.

To the literary community in western Canada, and beyond, Pat Lowther’s work, and her legacy, still live. And she lives, as well, in her daughter’s poems. Here is a prose poem from Christine’s New Power (1999).

July 15, 1994
There was fog at Tonquin beach yesterday morning, white as snow. Between billowing clouds of it I saw black birds swooping, and I could hear their calls. Crows were dive-bombing a raven. I called out: my best raven-croak. The raven seemed to answer.

Last night I dreamed it was my mother, her hair turned to feathers, her hands turned to wings. She perched upon a tall stump beside the trail. She was making a myriad of raven sounds, all in an effort to communicate with me. I could not, however I tried, understand her language, and I awoke in tears.
What were you trying to tell me?

Pat Lowther’s work is copyright to the Pat Lowther Estate

Email ThisBlogThis!Share to TwitterShare to FacebookShare to Pinterest
Labels: The Living Dead