There will be rose and rhododendron
When you are dead and under ground;
Still will be heard from white syringas
Heavy with bees, a sunny sound;

Still will the tamaracks be raining
After the rain has ceased, and still
Will there be robins in the stubble,
Brown sheep upon the warm green hill.

Spring will not ail nor autumn falter;
Nothing will know that you are gone,
Saving alone some sullen plough-land
None but yourself sets foot upon;

Saving the may-weed and the pig-weed
Nothing will know that you are dead,–
These, and perhaps a useless wagon
Standing beside some tumbled shed.

Oh, there will pass with your great passing
Little of beauty not your own,–
Only the light from common water,
Only the grace from simple stone! 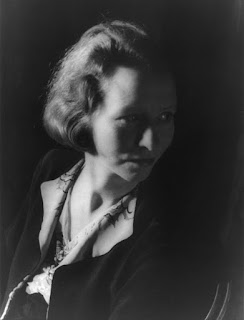 After preparing this post, it struck me that it will appear on Good Friday, when Christians around the world commemorate the suffering and death of Jesus – with the knowledge that, in a few days' time, they will celebrate the Resurrection, with all the significance of that, not only in terms of life after death but also sacrifice and atonement.

It's fair to say that Jesus lived on in a different sense as well – being remembered ever after by so many. Even non-believers know the story well.

As my spiritual path is different, I'll leave the religious discussion to others more qualified. Indeed I hadn't at first registered the fact that a poem on death – albeit with no  religious connotations – is, in a way, well-timed today.

And of course, on that first Good Friday, no-one anticipated the Resurrection. He was still being mourned as a family member, a friend, a great teacher.

I think we all understand – too well, some might feel – the sorrow of death, the longing to meet our loved ones again in a happier place, and the way they stay alive in memory.

Then there's this poem, which not only deals with a commonplace human death, but one that has not actually taken place yet (i.e. when the poem was written).

As it happens, two of my friends have died very recently. I don't know about you, but when I'm grieving I find it cathartic and strangely comforting to read poetry about death – elegies expressing other people's grief. The better the poetry, the more effective.

Edna St Vincent Millay is an old favourite of mine, and so is this "Elegy Before Death," in which she imagines a grief to come. The crux of it, of course, is in that final verse – whether the person one is thinking of has already died or not.

I remember, many years ago, losing someone I was very much in love with to a sudden, shocking, unexpected death – and noticing, months and months later, that leaves and grasses had started shining again. So I realised I had got past the first, worst grief. Until that moment I had been living what she says in this poem's final verse, and hardly even remarked it until it altered and the world started coming back to life (and so did I).

The recent losses are not quite so devastating, but sad enough, and again I turn to this beautiful elegy to help assuage the grief.

But it's not only an elegy; it is also, and even more, a love poem. If you don't have a need or wish to deal with death just now, you can think of it that way – a measure of how important this particular person (to whom the poem is addressed) is to the poet, so that if this one person were lost, in objective reality nothing much of any importance would be altered ... and yet, for the poet, everything would be irrevocably altered and nothing could be more important.

We have featured this wonderful poet several times already at Poets United. I featured her once in "I Wish I'd Written This" with a beautiful sonnet which is also both elegaic (again, "before death") and a love poem.

Kim Nelson, in "Classic Poetry" as well as featuring a delightful poem, gives a detailed account of Millay's life, so I won't repeat that information here.

Her poetry and letters, and books about her, are still very much available on Amazon.

The photo used here, which is by Carl Van Vechten, is in The Public Domain.