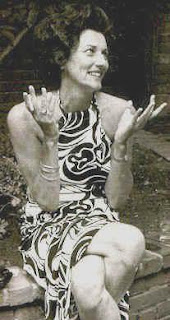 Anne Gray Harvey was born in Newton, Massachusetts, in 1928. Her parents were Mary Gray Staples and Ralph Harvey Sexton with her father being a successful wool manufacturer WWII which ensured a comfortable middle class lifestyle. The family however was far from ideal with Ralph being an alcoholic and her mother a frustrated writer that never felt fulfilled.
Anne would later write in a an interview of by Elaine Showalter – (read full interview)

Sexton: “My mother never touched me in my life, except to examine me. So I had bad experiences. But I wondered with this that every summer there was Nana, and she would rub my back for hours. My mother said, women don't touch women like that. And I wondered why I didn't become a lesbian. I kissed a boy and Nana went mad. She called me a whore and everything else:”

She clung to and spent most of her childhood with her great aunt Anna (her namesake) who she would refer to as Nana. Her Nana became her refuge from her dysfunctional parents and so when her aunt suffered from a severe mental breakdown that required hospitalization she was further traumatized beginning a life cycle of mental illness.

In 1945 her parents sent her to Rogers Hall, a boarding school in Lowell, Massachusetts, where she began to write poetry. Being both tall and beautiful many men took notice until at nineteen she met and eloped with Alfred "Kayo" Sexton II, even though she was engaged to someone else at the time. Later, during Kayo's service in Korea, Anne became a fashion model. She was far from faithful during her husband’s absence which lead to the marriage never being solid or trusting from the start. Soon after Kayo’s return to the United States he took a job working in Anne’s fathers company In 1953 she gave birth to her first daughter followed shortly after in 1954 being diagnosed with postpartum depression, suffered her first mental breakdown, and was admitted to Westwood Lodge, a neuropsychiatric hospital she would repeatedly return to for help. In 1955, following the birth of her second daughter, Sexton suffered another breakdown and was hospitalized again; her children were sent to live with her husband's parents. That same year, on her birthday, she attempted suicide. 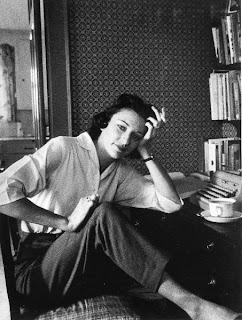 Depressed after the death of her beloved Nana in 1954 and the birth of her second daughter in 1955, Sexton went back into therapy. Her depression worsened, during the times her husband was gone and unable to cope there where several attempts at suicide led to intermittent institutionalization. . During these years, Sexton's therapist encouraged her to write. She was encouraged by her doctor to pursue an interest in writing poetry she had developed in high school, and in the fall of 1957 she enrolled in a poetry workshop at the Boston Center for Adult Education. Joining different writing groups in the Boston area, and she came to know such writers as Maxine Kumin, Robert Lowell, George Starbuck, and Sylvia Plath. Her poetry became central to her life, and she mastered formal techniques that gained her wide attention. In 1960 To Bedlam and Part Way Back was published to good reviews. Some poems such as “You, Doctor Martin," "The Bells," and "The Double Image" were often anthologized.

In 1962 Sexton published All My Pretty Ones. In 1967 Sexton received the Pulitzer Prize for poetry for Live or Die (1966), capping her accumulation of honors including the American Academy of Arts and Letters traveling fellowship (1963), the Shelley Memorial Prize (1967), and an invitation to give the Morris Gray reading at Harvard. She also received honorary degrees and professorships at Colgate University and Boston University.

Though she appeared confident publicly, Sexton was heavily dependent on therapists, medications, and close friends--particularly Maxine Kumin. An ongoing continuation of depressive bouts and comparatively frequent suicide attempts kept her family and friends unnerved. Finally, in 1973, Sexton told Kayo she wanted a divorce, and from that time on a noticeable decline in her health and stability occurred as loneliness, alcoholism, and depression took their toll. Finally on October 4th, 1974 she succeeded on taking her own life by carbon monoxide.

An incredibly talented woman and writer who like other woman of her time got caught in the cycle of morbid and experimental mental health system of the time. We as her readers are the ones who have benefited from the genius of this woman. She made the experience of being a woman a central issue in her poetry, and though she endured criticism for bringing subjects such as menstruation, abortion, and drug addiction into her work, her skill as a poet transcended the controversy over her subject matter. 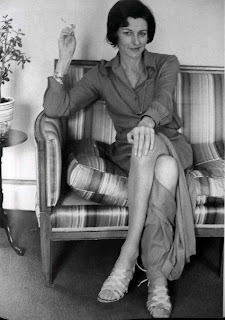 Her Kind  by anne sexton

I have gone out, a possessed witch,
haunting the black air, braver at night;
dreaming evil, I have done my hitch
over the plain houses, light by light:
lonely thing, twelve-fingered, out of mind.
A woman like that is not a woman, quite.
I have been her kind.

I have found the warm caves in the woods,
filled them with skillets, carvings, shelves,
closets, silks, innumerable goods;
fixed the suppers for the worms and the elves:
whining, rearranging the disaligned.
A woman like that is misunderstood.
I have been her kind.

I have ridden in your cart, driver,
waved my nude arms at villages going by,
learning the last bright routes, survivor
where your flames still bite my thigh
and my ribs crack where your wheels wind.
A woman like that is not ashamed to die.
I have been her kind.

This piece on Anne Sexton was written by bkmackenzie, a regular contributor to Poets United. If you would like to learn more about bkm you can do so by by visiting her poetry blog Signed .....bkm.  bkm is a regular contibutor to Poet United an active particpant in most activities found here at Poets United.  If you enjoy reading bkm's work please stop back in to see her some or latest contibutions.
Posted by Poets United