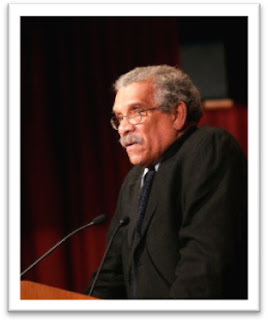 I have chosen to write about a poet who has written one of the most beautiful poems that I have ever read entitled, Love after Love.......

This poem was the epigraph in the novel The Time Traveller’s Wife, written by Audrey Niffenegger.

The time will come
when, with elation
you will greet yourself arriving
at your own door, in your own mirror,
and you will smile at the other’s welcome,

all your life, whom you ignored
for another, who knows you by heart.
Take down the love letters from the bookshelf,
the photographs, the desperate notes,
peel your own image from the mirror.
Sit. Feast on your life.

Derek Walcott was born in St Castries, St Lucia on 23rd January 1930. St Lucia, a tiny island in the eastern Caribbean, was at that time an outpost of the British Empire. At the age of fourteen years, he had his first poem published in the local newspaper, The Voice of St Lucia, on August 2nd 1944. It consisted of forty four lines of Miltonic-Wordsworthian blank verse.

Walcott’s maturity even then was beyond his years in terms of his strong independent thinking with regard to his religious convictions. It was his opinion that one would learn more from the teachings of nature, than from the teachings of mankind and the church. St Lucia at that time was more than 90 per cent Roman Catholic. The Walcott’s were part of a tiny Methodist minority. The poem, entitled ‘1944’, attracted the wrath of the local Roman Catholic priest, who represented the general opinion of the islanders. He accused Walcott of youthful shortcomings and of trying to undermine the authority of the Church. This only served to become a recurring theme in his work and added some complications to his own religious inclination. 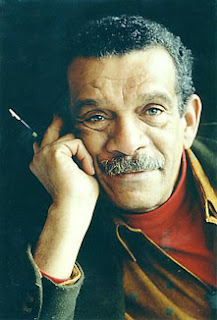 Walcott decided to commit himself to writing about his island and its people through his poetry.
At the age of nineteen he decided to self finance and publish two slim volumes of his work. His influences then were Homer, Dante, Shakespeare, Joyce and T.S. Eliot.

Better a jungle in the head
than rootless concrete.
Better to stand bewildered
by the fireflies' crooked street;

winter lamps do not show
where the sidewalk is lost,
nor can these tongues of snow
speak for the Holy Ghost;

the self-increasing silence
of words dropped from a roof
points along iron railings,
direction, in not proof.

But best is this night surf
with slow scriptures of sand,
that sends, not quite a seraph,
but a late cormorant,

whose fading cry propels
through phosphorescent shoal
what, in my childhood gospels,
used to be called the Soul.

He was educated at St Mary’s College on the island and then with a scholarship he attended The University of the West Indies in Jamaica. In 1953, Walcott moved to Trinidad where he founded and directed Trinidad Theatre Workshop. He wrote many plays, notably Ti-jean and His Brothers and Dream on Monkey Mountain.

His first real breakthrough came with the publication of his collection of poetry, In a Green Night in 1962. By this time his works had broken into the United States and eventually he became a Lecturer at Boston University. He has also taught at the universities of Columbia, Yale and Harvard.

Walcott formed literary friendships with two other poets: Joseph Brodsky a Russian exile, and Seamus Heaney, an Irishman. They shared a joint admiration for the work of W.H.Auden, whom they regarded as a mentor. They worked together to produce Homage, an appreciation of the American poet Robert Frost. 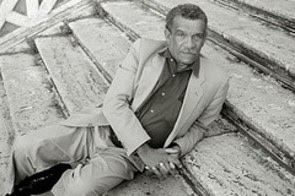 The experience of growing up on the isolated volcanic island has had a strong influence on Walcott’s life and work. His father had been a Bohemian watercolourist and may have given Derek the interest he later developed in painting landscapes and the occasional portrait. His painter’s eye was obvious with his poetic descriptions of landscapes.

from the summer-sleeping house
drowsing through August.

The three most influential and inspirational sources for the poems of Derek Walcott have been the Caribbean where he was born and where he now lives for part of the year, the English language and his African origin. He has worked to weave his wide-ranging contacts with history, literature and reality and his evocation of the sensuous Caribbean into his many poems. He has regularly spoken out about the unfair distribution of the world’s wealth, violence and war. He is also a compassionate poet with a love and a reverence for life.

Walcott has progressed through many forms and poetic styles, from free verse to the more formal classical forms. His two contending passions of lyric and narrative mark his craftsmanship and his more recent progression towards the long narrative. In 1992, Derek Walcott was awarded The Nobel Prize in Literature. He has a chair in English in Boston University. 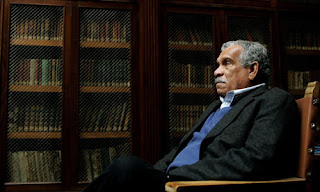 There are so many islands!
As many islands as the stars at night
on that branched tree from which meteors are shaken
like falling fruit around the schooner Flight.
But things must fall,and so it always was,
on one hand Venus,on the other Mars;
fall,and are one,just as this earth is one
island in archipelagoes of stars.
My first friend was the sea.Now,is my last.
I stop talking now.I work,then I read,
cotching under a lantern hooked to the mast.
I try to forget what happiness was,
and when that don't work,I study the stars.
Sometimes is just me,and the soft-scissored foam
as the deck turn white and the moon open
a cloud like a door,and the light over me
is a road in white moonlight taking me home.
Shabine sang to you from the depths of the sea.


(This piece on Derek Walcott was written by Eileen T O'Neill.  She is currently one of our contributors and poets found here at Poets United.  If you would like to learn more about Eileen or read some of her poetry you can  visit her blog "Words and Thoughts".  Eileen is a poet and writer who has been a wonderful supporter of Poets United since its start.  We would like to thank her for all of her hard work.)
Posted by Poets United