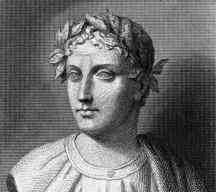 (translated from the Latin by James Michie)

The young bloods come round less often now,
pelting your shutters and making a row
and robbing your beauty sleep. Now the door
clings lovingly close to the jamb--though, before,

it used to move on its hinge pretty fast.
Those were the days--and they're almost past--
when lovers stood out all night long crying,
"Lydia, wake up! Save me! I'm dying!"

rising and raging, and so is the fire
in your raddled loins, the brute desire
that drives the mother of horses mad.
You'll be lonely then, and complain how sad

that the gay young boys enjoy the sheen
of ivy best or the darker green
of myrtle: dry old leaves they send
as a gift to the east wind, winter's friend.


Horace (Quintus Horatius Flaccus) the Roman lyric poet, satirist, and critic is, for good reason, best know for his Odes. Failed at warfare, he excelled in the arts and was ultimately a significant influencer of Ben Jonson, Alexander Pope, W.H. Auden, Robert Frost.
Posted by Unknown