know them by absence—spirals of seashells, circles and riverflow
bend in the rock where you get off the path
and find the track invisible. Getting lost helps.
That is the purpose of deserts and distance. City cages
cede to seasedges. Sit on a beach for the waves reassurance
Slip away like a snake in a rainforest. Alone is easier
To retrieve original silences(and lost ones)
To forget time(apart from pulse/and heartbeat)
To remember who and why you are(in connection
with others and with consciousness and choice means
every path is sacred, every choice is yours. Before and after,
we will be forgotten. Who counts waves? Moons? Stars?
Who witnesses what is most important? Meaning waits
even if we rush fast past. Inside every leaf, a new forest.
In each drop, oceans. One is all in miniature. Maps hide mysteries
lest crowds demand miracles made for moments. Like this one
When you make a sacred space for breath. Time slows.
Death waits. Life pulsates through each opened cell.
There is a quality innate. Found, not made. Like a rock pool
where life in tides waves...Where water knows. We visit, but must go
What is most sacred might be best met in silence
Seeking with attunement and respect—via riversedge/in deserts
in the speech of rocks and stones and stars long past
Most of all…in silences...(like this one... 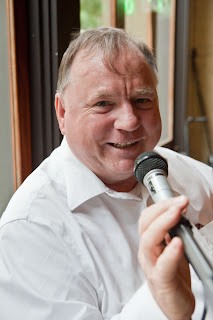 I’ve known Thom for decades, since he was Tom the Street Poet in Melbourne, founder of the Street Poets who used to stand on street corners handing out sheets of poetry to commuters going to work. He was also Dial-a-Poet; people could ring a number just as they would the weather or the time, to be greeted by lines of verse. It was listed in the Melbourne phone book along with those other services.

Now he has been based in Austin, Texas for many years (having married an American). There he has established many venues for performance poetry; and he and three other poets started the Austin International Poetry Festival, which has grown to be a huge, prestigious event.

He also travels to other countries — including home to Australia every now and then — to present poems, give workshops, and generally inspire people through poetry. He is quoted on his website — where you can find more details of his history and his many activities — as saying: "I'm not working for poetry, I'm working for the people who want to be poets, who want to honor the poet inside of them. I'm working with them so we can all honor the diversity of verse." He firmly believes poetry is the last bastion of free speech.

He loves to improvise to music, which was the thing that started him on his poetic career — in sixties Australia, at a music festival, he was inspired to get up in front of the musicians and chant, over and over again to the crowd, ‘This is your life! Don’t waste your time! Get up and dance!’ To his amazed delight they did, and he thought, ‘This is what I want to do for the rest of my life.’

I have had people say to me that they are not so impressed with his poems when they read them on the page. It’s true that many of them are harder to ‘get’ that way, because Thom is really a performance poet, whose rhymes and rhythms aren’t always obvious until you hear him chant his work aloud. Luckily, you can do that on YouTube.

He goes by various names, because he likes to keep letting go of identity. There is Thom Moon 10, Thom the Circus, Thom the Future, and Thom Anon; probably more. His actual, legal name is Thom Woodruff, and he is known all over the world as Thom the World Poet. On facebook he is Thom Worldpoet. One of his friends in Texas likes to think of him — partly because of his colourful dressing for performance — as the jester, delivering serious messages in the guise of entertainment. And a woman here at whose venue he gave a reading said afterwards, breathless with admiration, ‘He is really teaching all the time.’ In his writing and his life, he is absolutely life-affirming.

Though I know he is many things, I see him primarily as an inspirer. I always grab him when he’s in this part of the world, to give a workshop to WordsFlow, the writers’ group I facilitate. It is always enthusiastically received. Even those in the group who don’t care for poetry love Thom’s workshops! You can read some joyful accounts of them at the WordsFlow blog.

And you can read lots more of his poems at his blog, The Poetry of Thom World Poet. Personally I prefer his nature poems and his domestic poems to his political and historical pieces, but he has a wide audience for all his work. The one above I love for its content, its language, its music, its flow, and its beautiful crafting so that this one you HAVE to read as intended.

Thom is the most prolific poet I've ever come across. He also produces CDs and small booklets jam-packed with poems. There is a list on his website, with ordering information.

Email ThisBlogThis!Share to TwitterShare to FacebookShare to Pinterest
Labels: I Wish I'd Written This, Sacred Places, Thom the World Poet, Thom Woodruff