purple the heart
my father won in Korea
then this trophy case
shattered and split
with dried seeds of blood
on still clenched fist
all his medals torn apart
ripped and wrinkled ribbons
resting on splintered glass
meaningless medallions
tossed aside in disgust
he, repeating over and over
I did this for what?

purple the smoke of
burning cedar and sage
of lavender oil rubbed
deep into head, chest
hands and feet
elders predicted
there was not enough
their medicine could do
no amount of ceremony
could wash away
that amount blood
the sickness
would have to fade
like the signs
of fire, flood or
earthquake
with the years
he’d have to pray
away the madness
await his destiny 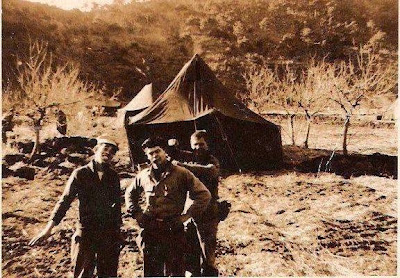 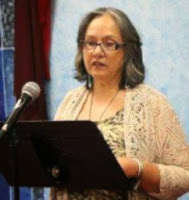 I first encountered Odilia's work on MySpace. Very artistic, she had one of the most visually colourful and exotic blogs there, and it was full of wonderful poetry. A prolific poet, she did many series of haiku, and I considered her the master of the pantoum (she was experimental within the form). As you can see, she is equally brilliant in free verse.  I'm sure you understand why I chose this particular poem — it's so moving!

Odilia says of herself:


Author Odilia Galván Rodríguez, is of Chicano-Lipan Apache ancestry, born in Galveston, Texas and raised on the south side of Chicago. As a social justice activist for many years, Ms. Galván Rodríguez worked as a community and labor organizer, for the United Farm Workers of America AFL-CIO and other community based organizations, and served on various city/county boards and commissions. She is the author of three books of poetry, of which Migratory Birds: New and Noted Poems, is her latest publication.  Her creative writing has appeared in various literary journals and anthologies such as, The En'owkin Journal of First North American Peoples, New Chicana / Chicano Writing: 1& 2, Reinventing the Enemy's Language: Contemporary Native American Women's Writings of North America, Here is my kingdom: Hispanic-American literature and art for young people, Zyzzyva, The Beltway Poetry Quarterly, La Bloga as well as other online sites. She most recently worked as the English Edition Editor for Tricontinental Magazine, in Havana, Cuba under OSPAAAL, an NGO with consultative status to the United Nations.  She is also one of the facilitators of Poets Responding to SB1070, a Facebook page dedicated to calling attention to the unjust laws recently passed in Arizona which target Latinos, and teaches Empowering People Through Creative Writing Workshops nationally.

You can read more of her poetry at her blog, feathers from the muse's wings, or in her Facebook Notes, and you can hear her read (beautifully!) on YouTube. The title poem of her book, Migratory Birds, is at Poem Hunter, and you can find the book at GoodReads.


Any poem or photo used in ‘I Wish I’d Written This’ remains the property of the copyright holder (usually its author).

Email ThisBlogThis!Share to TwitterShare to FacebookShare to Pinterest
Labels: I Wish I'd Written This, Odilia Galvan Roriguez