her beaded dress
by Kate Steere

her beaded dress, his fingers tangle in her hair

breathless, he watches her eyes change

in her reflection, he remembers the first time

a brief hesitation, the ring becomes part of the tides

his ringtone...it's playing their song

hand in hand, they dance in the silence 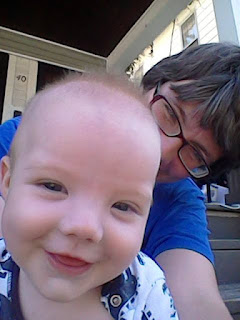 I’ve known Kate Steere, shown here with her youngest child Tim, for some time on facebook. She describes herself as a writer, artist, mother of four and admirer of all things Sherlock and Benedict Cumberbatch related.  (I share her passion for Benedict and Sherlock.)

She was born in Philadelphia, raised in the South as a child, spent her late childhood and early adulthood in Colorado, and most of two decades in Charlottesville, Virginia. She currently resides in Albany, New York with her partner of 12 years, and her assorted children.

I love this romantic poem, which avoids cliché and creates a sensual scenario both delicate and vivid.

Kate usually writes short form poetry, explaining that her time and patience are limited at the best of times. With four young children, the latest born only a few months ago, I can well imagine!

Not university trained – though she assures us that she knows a haiku from a sonnet – her writing comes from her observations of nature, and of the characters in her life.

At the moment she doesn’t feel the need to do a book. She says, ‘I really write only when I feel a need to, then I let it go. I tend to not revisit them, so editing enough for a book would be a bit of a chore. LOL.’ Again, I think those children might have priority. (Smile.)

As for her paintings, she tells me she usually gives them away or hangs them in her house to ‘torture’ herself! I guess she means she thinks she could do better, but I love the ones I’ve seen posted on facebook, such as this (a section of a larger work): 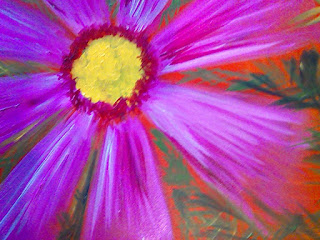 Because the poem I chose is short, I’ll give you another. Some of the words in the following piece are unfamiliar to me, but obviously they’re regional and I’m guessing USA readers will understand. The poem works anyway, in its strong sense of identity and belonging.

my children are wahoos
(according to wikipedia, a fish)
raised on chaps, bodos
and bad football

my roots were chosen
not by birth, not given
not so easily broken
as that tree

Email ThisBlogThis!Share to TwitterShare to FacebookShare to Pinterest
Labels: I Wish I'd Written This, Kate Steere