The Ballad of Dead Ladies
by Francois Villon (1431–?)
translated by Dante Gabriel Rossetti

Tell me now in what hidden way is
Lady Flora the lovely Roman?
Where’s Hipparchia, and where is Thais,
Neither of them the fairer woman?
Where is Echo, beheld of no man,
Only heard on river and mere,—
She whose beauty was more than human? . . .
But where are the snows of yester-year?

Where’s Heloise, the learned nun,
For whose sake Abelard, I ween,
Lost manhood and put priesthood on?
(From Love he won such dule and teen!)
And where, I pray you, is the Queen
Who willed that Buridan should steer
Sewed in a sack’s mouth down the Seine? . . .
But where are the snows of yester-year?

White Queen Blanche, like a queen of lilies,
With a voice like any mermaiden,—
Bertha Broadfoot, Beatrice, Alice,
And Ermengarde the lady of Maine,—
And that good Joan whom Englishmen
At Rouen doomed and burned her there,—
Mother of God, where are they then? . . .
But where are the snows of yester-year?

Nay, never ask this week, fair lord,
Where they are gone, nor yet this year,
Save with thus much for an overword,—
But where are the snows of yesteryear?

Villon’s poetry has had a number of translations into English. I like the Rossetti better than others I’ve seen of this particular poem. And it is Rosetti’s translation of the refrain which has become famous in its own right.

A Wikipedia article on this poem tells us:

Particularly famous is its interrogative refrain, Mais où sont les neiges d'antan? This was translated into English by Rossetti as "Where are the snows of yesteryear?",for which he coined the new word yester-year to translate Villon's antan. The French word was used in its original sense of "last year", although both antan and the English yesteryear have now taken on a wider meaning of "years gone by".

The article goes on to list many, many uses of this refrain in contemporary literary contexts. It includes the original French words of the whole poem, which you might be interested to look at. (Rossetti gets his rhyme scheme right.) 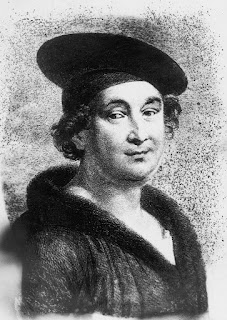 Villon is an intriguing figure. The Encyclopedia Britannica for kids tells us:

One of the greatest French lyric poets, François Villon was also a criminal who spent much of his life in prison or in banishment from medieval Paris. His emotional poems speak of love and death, revealing a deep compassion for human suffering, and they express in an unforgettable way his remorse for his sins.

From the Wikipedia article (see link on his name, above) we learn that, born into poverty, he became an Arts student at the University of Paris, receiving his Bachelor’s degree in 1449 and Master’s in 1452. Some years later he was involved in a brawl after which his opponent died. Villon fled and was sentenced to banishment from Paris; but he was pardoned seven months later on testimony that his victim (and attacker) had forgiven him before dying.

He was later involved in a major robbery, as one of a gang of student-thieves. Again he was banished, and embarked on four years of wandering, possibly with a group of thieves.

Brawling and thieving seem to have been his usual crimes, sometimes resulting in periods of imprisonment. In 1462 he was arrested, tortured and condemned to be hanged, but in 1463 the sentence was commuted to banishment.

Nothing more was heard of him that can be verified, though Rabelais wrote some apocryphal stories.  One of his translators, Anthony Bonner, speculates:

He might have died on a mat of straw in some cheap tavern, or in a cold, dank cell; or in a fight in some dark street with another French coquillard; or perhaps, as he always feared, on a gallows in a little town in France. We will probably never know.

There is also an examination of his life and poetry at The Poetry Foundation and a very readable, concise but informative biography at Academy of American Poets.

As to the poetry, we are told in Wikipedia:

Villon was a great innovator in terms of the themes of poetry and, through these themes, a great renovator of the forms. He understood perfectly the medieval courtly ideal, but he often chose to write against the grain, reversing the values and celebrating the lowlifes destined for the gallows, falling happily into parody or lewd jokes, and constantly innovating in his diction and vocabulary; a few minor poems make extensive use of Parisian thieves' slang. Still Villon's verse is mostly about his own life, a record of poverty, trouble, and trial which was certainly shared by his poems' intended audience.

An Amazon blurb of a recent translation by David Georgi says:

One of the most original and influential European poets of the Middle Ages, François Villon took his inspiration from the streets, taverns, and jails of Paris. Villon was a subversive voice speaking from the margins of society. He wrote about love and sex, money trouble, "the thieving rich," and the consolations of good food and wine. His work is striking in its directness, wit, and gritty urban realism. Villon’s writing spurred the development of the psychologically complex first-person voice in lyric poetry. He has influenced generations of avant-garde poets and artists. Arthur Rimbaud and Paul Verlaine have emulated Villon’s poetry. Claude Debussy set it to music, and Bertolt Brecht adapted it for the stage. Ezra Pound championed Villon’s poetry and became largely responsible for its impact on modern verse.

Meanwhile, the Rossetti translation includes words and phrases we find old-fashioned now, but it still makes music. And it gives us that version of the refrain which has become part of our collective consciousness independently of its source – as, I gather, the original, Mais où sont les neiges d'antan? has too.

There is a free pdf download of good translations by A.S, Kline (2004) here. And there's a collection at PoemHunter where the translations are also good, though unattributed. (Not being a French scholar, I mean 'good' in terms of poetry rather than accuracy.)
Posted by Rosemary Nissen-Wade