For Lebanon
By Rhie Azzam

I've been saying I'm going to write about this for weeks,

but the truth is,

I don't know if I can

I don't know how to make beautiful devastation.

I see red stripes and a cedar tree.

They tell me that 60 people were killed in a village outside of Beirut,

The first female pharmacist in the history of Lebanon

I see a woman who overcame so much,

and followed her dreams,

I see myself in the mirror at three years old,

she's in front of me,

wiping her make up off of my face,

They broadcast the score

the one I've spoken with my whole life,

the one I've never met because

he was fighting this battle the year I was born.

I hear his voice, "anuphebic, habiti"

He tells me his home is gone

is brushing her teeth

with a head full of dreams she can never chase,

hearts she will never break,

in a bomb ridden slumber,

I don't want devastation for my family,

there is no solution.

there is no hope

this war on terrorism has cost me my hope

my country is killing my people

and i am more helpless than i have ever been.

and what is war but

terrorism with a bigger budget?

I want to scream, shout, tear the roof off

but what's the use?

My anger gets me nowhere but angry,

my hate won't save my heritage

these are all emotions not worth feeling anyway,

because there is nothing i can do to save them

and bitching about it gets me nowhere.

i pray to Kali, Buddah, Christ, God, Nefertiti, Diana, Lakshmi, Thor, Zeus, Mohammed, Allah, Yaweh, I pray to the god in all of you,

I pray my family lives to see tomorrow,

I pray my cousins will be granted the luxury of life,

I pray my aunt becomes a grandmother,

I pray to God they get through this.

I want the world to see,

that this isn't some nameless, faceless fight,

and it deserves better.

Although this powerful piece was written some years ago, sadly its sentiments could apply to many parts of the Middle East today. 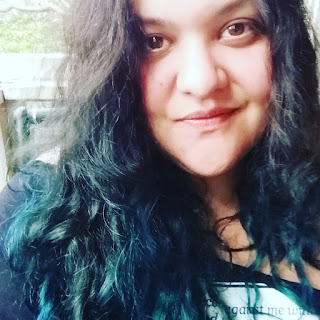 I met Rhie when I visited Austin, Texas in 2006, at an open mic in a café called The Hide-Out.

I was enthralled by the dynamic poetry I heard there, and no-one was more dynamic than Rhie. She strode out on the stage, completely owning it, and performed a fierce, angry poem in a strong voice, with assured gestures. I was going to say she belted it out, but that would be doing her an injustice; it was not a rushed or careless performance as that might imply. She followed it with a tender poem to a dead friend, recited in a much gentler way, moving many of us to tears.

We fell into mutual love and respect immediately, as poets and women. I was only in Texas for a few weeks, but I made some permanent friends and she’s one of them. She’s decades younger than me, and I expect we’ll never see each other in person again, but our shared poetic and socio-political sensibilities transcend such trivia as age and geography. (Of course, the internet and social networking are a big help.)

Originally from Dallas, she studied Sociology at the University of North Texas. When I met her she was homeless and unemployed, yet with no loss of personal dignity. She tells me she was homeless off and on between 2000 and 2006, attended several semesters during that period, and that for four years she hitch-hiked around the US, crossing the country 13 times, a feat she’s proud of.

Since then she’s changed her circumstances. She has a job and a home, and has now been happily married for three years. Still quite a young woman, she says about herself:

‘I've been writing since I was 12 as a way to hear myself think. My future cult will be called "amare." I want so badly to not be one of those hippie dippy folks traipsing the world with love on my tongue, but some day I hope we will remember that love will bind us. And then, maybe, we could feed the hungry (which I am blessedly no longer), house the poor, offer safety to those fleeing death. "All you need is love," or so I've been sung to all my life, but perhaps love + action is the better plan.’

The poem I chose for you is sad and outraged, and also full of love – for her family, her homeland, and for Life.

You can find more of Rhie’s powerful writing at her blog,  Words I Live By.

Email ThisBlogThis!Share to TwitterShare to FacebookShare to Pinterest
Labels: I Wish I'd Written This, Rhie Azzam