The Confessor of Winter Fields
By Brendan MacOdrum

He wanders across a field browned hard with winter
with a cold wind raking his hair, like a mother would
saying farewell to a son, perhaps now in late greeting.
A photocopy of the German dispatch flapping in his hand
while the old villager lumbers slowly just ahead,
her black cobbles so loose they barely shoe her feet.

When she stops in the middle of the usual empty waste
he whispers a prayer, asking God to make him strong;
he always balks looking where vocation commands.
Not for me Lord, for them, for us all—: And then
the woman begins to speak, repeating what she told
his team back in the village. She was just ten years old
when the German troop car rolled into town
and the soldiers got out barking one word: Jews!

—Just ten years old! she cries, though her eyes
aren’t buying the complaint, nor does the winter day—

And then hauled screaming women away from the men
and ripped bewildered babies laughing from their breasts,
walking them all out from the village in brutal file.
Every Jew was lined up along what was once a ravine—
all the children used to game there playing monster— a
nd began the slow and patient labor of full slaughter.
Emptying clip after clip of rifle fire into their backs
and heads so the bodies fell in and down upon each other.
(The babies they whacked apart with shovels.)
Slowly the ravine filled up with rows of the
stunned dead, faces down, arms and legs asprawl,
piled atop each other, like shit in an outhouse,
with such brutal art that the whole ravine became
a brimming wound, an ancient village heart to bury.

The soldiers broke out schnapps and beer, toasting
the Fatherland and purity and unbreakable steel.
Took turns through the night going back to the pit
to fire more rounds then piss, their harsh laughter,
she said, like a boot crunching the last bone cries.
The next morning they put the villagers to work,
covering the pit with dirt with dented, bloody shovels.
Then drove off in their grey trucks with red swastikas
and were gone, dust motes swirling back down glory’s road.

The mound moved for three days, the old woman said.
Her eyes black and deep inside old wrinkles,
her voice calm and steady in the lock of winter ice.
One hundred fifteen Jews in that unmarked grave
that everyone must then forget to work the fields
and wash rags and cook potato soup each night.
The first year no one slept well, crying out
as if suddenly touched by reaching fingers.
But over years the raw mound smoothed over.
It stilled at last, she said, but no one went near.

Seven decades later a SUV bumped down that road
and the field workers got out to ask: Is it true?
Then a week later the priest, who asked: Is it time?
His voice gentle and calm, allowing the ancient
ritual to unhasp the lock upon their village door.
He’d learn to ask that question after a thousand
visits to the shattered ends of empire. Because
it wasn’t just that this old farmer or grandmother
bore witness to the shriek of atrocity that day:
Rather it was how they assembled with such joy,
gleeful, as if it the summer fair had come. How they
jeered for the Einsatzgruppe to do the deed.
Catching the sudden flame of Reich genocide
to dance around the pit with burning hair.

That. And ultimately this: To turn then back
to work and hearth, singing songs and raising babies
with that mound still moving every night,
the babies’ fingers still threshed in mothers’
hands, a man down the loam calling for his wife,
a young man’s mouth close to the surface still open,
praying to Yahweh or justice or simply open air.

To live on as if no heart was lost, none again needed …

Jewish custom prevents the moving of the dead—
they’ll mark a ledger with GPS coordinates
but attempt no re-internment, no marker either
(looters are as ageless as the crow’s Gestapo).
But human memory adds with each next find
another cache to the vast deep ossuary
that sprawls, like a city, beneath the ends of Reich.
A library of spines and skulls and ribs and rags
whose chaos sprawl in darkness is roofed
by the quiet footpads of the everyday, not
to dance but worse: To walk this way away.

The priest has repeated this scalding day for hundreds
of coldest afternoons, revealing to him at least
that you don’t forget what you can’t admit.
That power sings its own black art, seducing every
generation to solve old divisions new steel. It makes
one both sad and humble, he says, exhuming the
true meaning of final solutions. Is it true?

There’s no confession of the living without
the real remembrance the dead. Is it time?
Freeing nightmares from imprisoned heads.
The woman in her black shawl like so many
others standing so old and feebly by blank earth
not cold anymore, hot tears down a cheek at last.
The sky no different with winter gripping down,
no churchbells ringing nor angel wings abound.

Just a gentle stillness now rising from the mound,
the sad dead at last welcomed from our winter tomb. 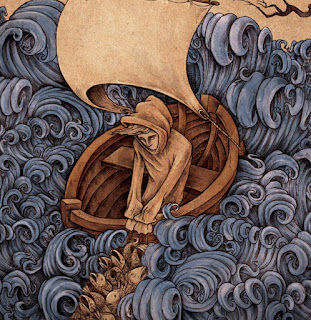 The poet tells me: 'Brendan MacOdrum is the mask worn by the poet of Oran's Well. The handle is mythic, based the characters of Brendan the Navigator and MacOdrum of Uist, a selkie from the Hebrides. History is mystery and mystery is history in the Well. Lots of things aquaean and piscine and cerulean down there, too. This poem celebrates the ides of October.'

You may well be familiar with Brendan's work already via his blog, including this recent poem. I admire his poetry very much, and knew I would sooner or later beg permission to use something of his for 'I Wish I'd Written This'. But which? There are so many I'd love to have been capable of.

I loved the ones based in mytholgy, and those reminiscing about earlier days as a musician and a lover (almost like a modern-day wandering troubadour, in some of them). I loved the sonorous music of his words. His poetry is many things, above all beautiful.

I thought I had better wait a while until those I loved best had time to recede from people's immediate consciousness.

Then I read this and all my previous ideas were blown away. The language is as brilliant as ever, but the effect plainer befitting the harsh subject matter. And never mind if some of you have read it very recently, I couldn't wait too long to post it — I think it needs to be seared into everybody's consciousness right now.

I'm sure you don't need any further commentary from me.

There is a back story about the inspiration for this poem, which I've lifted from his blog too: 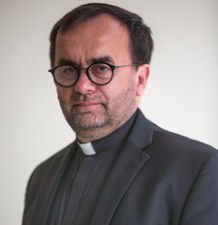 Father Patrick Desbois is a Catholic priest and president of Yahad–In-Unum (“Together as One”), a global humanitarian organization dedicated to identifying and commemorating the sites of Jewish and Roma (gypsy) mass executions in Eastern Europe during World War II. In 2004, he began to research the story of the Jews, Roma and other victims murdered in Eastern Europe during the Second World War by the Nazi mobile killing units called the Einsatzgruppen. Very little is known about these mass killings because there were so few survivors, and the last village witnesses are very old now.

The organization works through archival research followed up by research trips usually led by Desbois. During each trip, the team travels from village to village, where they interview and film the surviving eyewitnesses, using testimony of witnesses to discover the locations of the graves. Once the graves are located, the team uses high-tech equipment to obtain forensic evidence that validates the testimonies. When the team returns to Paris, the translated video testimony and the physical evidence is archived. So far, more than 1,300 killing sites have been identified across Eastern Europe, and the bones of more than 1.5 million unaccounted Jews.

CBS’ 60 Minutes recently profiled the priest, you can see the episode here. Desbois also comments (here) on similarities between the mass executions by the Nazis and the very public and broadcast executions by ISIS. The monster is never far.

P.S. Apologies to Brendan and readers that this poem was initially posted without the stanza breaks. I have been having huge problems with internet access lately, which interfered with checking it properly and fixing it as soon as I became aware.

Email ThisBlogThis!Share to TwitterShare to FacebookShare to Pinterest
Labels: Brendan MacOdrum, I Wish I'd Written This