You Were Brave in That Holy War

You have done well
In the contest of madness.

You were brave in that holy war.
You have all the honorable wounds
Of one who has tried to find love

Where the Beautiful Bird
Does not drink.

May I speak to you
Like we are close
And locked away together?

Once I found a stray kitten
And I used to soak my fingers
In warm milk;
It came to think I was five mothers
On one hand.

Wayfarer,
Why not rest your tired body?
Lean back and close your eyes.

Come morning
I will kneel by your side and feed you.
I will so gently
Spread open your mouth
And let you taste something of my
Sacred mind and life.

Surely
There is something wrong
With your ideas of God.

O, surely there is something wrong
With your ideas of God

If you think
Our Beloved would not be so
Tender.

A friend posted this on facebook in December and I fell in love with it instantly. (Well, the kitten. And then, the beautiful conclusion.) 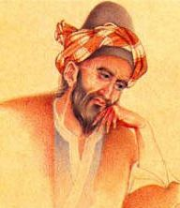 Hafez (aka Hafiz; full name Khwaja Shamsu d-Din Muhammad Hafez-e Shirazi) was an Iranian lyric poet of the 14th Century, still one of the most famous and beloved poets in his country. Wikipedia tells us he is the most popular poet in Iran, whose works can be found in almost every home, and are often used as proverbs or for a kind of fortune-telling. The country even celebrates a Hafez Day (Oct. 12). Among other things, he was a prolific writer of ghazals.

An editorial note at Amazon says that he lived
towards the end of what is often seen as the golden age of Persian poetry. He lived almost all his life in the southern city of Shiraz where he was involved in the court circles of various rulers and played an important role in the vibrant literary and spiritual life of the times. His poetry is collected in his Divan, which contains nearly 500 ghazals and some other verse. Little is known about his personal circumstances. His reputation was established in his own time and has continued to grow ever since, to the point where Iranians and many others regard him as one of that nation's greatest poets.

I'm guessing we don't have any definitive images of him from that time, but he is usually portrayed as looking something like this picture, which is an artist's idea of him – and I think it's a fair assumption that an Iranian man of that time would have looked quite like this.

His work is still in print. You can find English translations at Amazon, at this link. You can read a number of his poems at Poetry Soup, also here and here. And there's this downloadable pdf.  Enjoy!