My friends, I have a very special treat for you today. Shaista Tayabali, who inspires us with her writing at Lupus In Flight, is one of our early members at Poets United. Over the years, I have followed her uplifting and inspiring work with admiration, the more so as Shaista struggles with a serious health condition, as you might surmise from the title of her blog. This young woman has a radiant spirit, as you will soon discover. Recently, she wrote two poems I wanted to bring to you, and happily, she said yes to my request. Shaista lives in Cambridge with her very wonderful and talented family. So, for this visit, the best teacups and saucers must come out. The Earl Grey is simmering under the tea cozy, and there are small English biscuits on the pretty plates. Gather 'round. 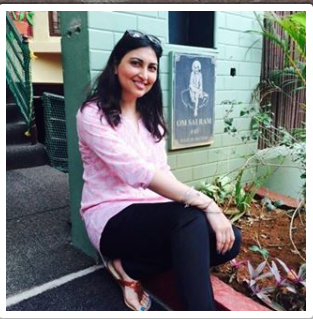 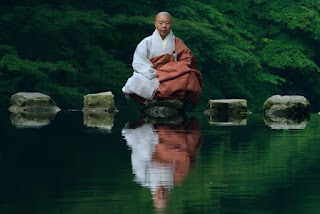 There is a nun in South Korea
Who walked up the side of a mountain
To Baekyangsa temple, when she was
Seventeen, and her mother had just died.
You have come here to live,
Said the nun who opened the door,
Not asking a question. Just telling
A truth that had yet to manifest.
Jeong Kwan unpins her freshly
Laundered robes and whispers them
Around her shoulders. How old is she?
Only the mountain knows.
But the taengja tree outside her window
Is 500 years old. Hardy orange, it still
Bears fruit, and Kwan uses the sour juice
In her cooking.

She pickles lotus root three different ways,
Then checks on jars of kimchi. She never
Uses garlic, onions, scallions, chives, leeks.
Too distracting for a monk.
But soy?
Soy excites her.
Sometimes I agree with the world
That to be a mother is everything. Is the key
And the lock. Jeong Kwan vowed at seventeen
To not burden her children with the pain of her death.
There is something in that,
For me.
We can't all choose to opt out or the world
Would stop spinning
Around humans. Bees might take over. Or
Rats. Or better still, dust motes of light. Or dark.
Jeong Kwan unfurls petal after petal
Of the lotus flower, soaking the skirt
In water. Later, she will pour the water
Into a pot and you will want to gulp the tea
As though you are parched. You are parched
And this is the tea of enlightenment. The tea
That rings the bell of truth - life can be this
Way. An art. A craft. A discipline. A dance.
Three slices of lotus root, pickled
In an heirloom of soy sauce.
(c) Shaista Tayabali, 2017 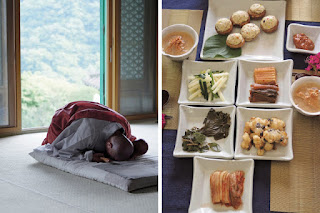 Sherry: Shaista, I am transported by this beautiful piece, as I share your love of the mystical wisdom of the East. Tell us about this poem. We are all ears!

Shaista: For over a decade, I have been among the multitudes of admirers of Zen Buddhist monk Thich Nhat Hanh- not least because, aside from his charming ways and engaged Buddhism philosophy, he is also a beautiful poet. His style of writing with simplicity, musicality and yet profound wisdom and truth inspired me years ago to dispel any notion that I could be a poet of formal verse. Thây, as he is known to his students, taught me to follow my inner rhythm - not ideal if you want to be critically acclaimed or even published in the finer poetry mags, but exactly right if you are me, and need only to follow your art as it leads you to truth.

Sherry: I love that! "To follow your art as it leads you to truth!" And you had the good fortune, a few years back, to attend a retreat with Thay, which must have been amazing!

Shaista: I have long been an obsessive fan of a Netflix series called 'Chef's Table'. Some may think it pretentious or overly aesthetic... I think each episode is an extraordinary piece of film-making attempting to encapsulate the desperately - and I use that word with deliberation - stressful life of globally successful chefs. And then, in series three, episode one, there appeared Jeong Kwan. 'I am not a chef,' Kwan announces. 'I am a monk.' And so she is. Oh, but she is very much a skilful chef, too. It is just that out there in Baekyangsa temple, she is only cooking for herself and two other nuns. Or sometimes for outsiders, laypeople, visitors. And then last year, for New York's culinary critics, who were overwhelmed, transported, briefly enlightened. And wanted to travel to South Korea immediately to learn temple cuisine.

A monk's life is not easy. Especially if you began novice life as a child or teenager as Kwan did. Not enough sleep, endless rounds of prayers and meditation, ceaseless repetition of daily chores. In the midst of such cycles, grace can also be found, and beauty. And a kind of courage. The courage to step forwards every day without needing outward validation, or the stamp of success. I am not a monk, nor do I live as one - but there are limitations on my outer life because of the illnesses I live with. So a figure like Jeong Kwan is deeply moving to me.

Sherry: Your recent poem "Blue" describes this so well. Let's include it here, shall we?

If you were to ask meWhat my favourite colour isI would have to say blue;Even though blue is the colourOf the plastic curtain my elbow keeps brushingAs I type this poemLeaning towards the closed hospital window.They've painted the edges of the buildings outsideThe shade of my first bedroom in England -The Blue Room, I called it, not inventively.Which came first? The chicken or the egg?My niece Eva says, 'Chicken.'And we all marvel.Which came first, the blue paper curtains,This long marriage with hospital,Or my love of blue?Hard to tell.The sun is up. The kind of torch light brightThat hurts your eyes but does its jobMatter of factly. Some nurses are like that.Others make room for hugs and jokes; jokesThat are a nimbus around a heart of compassion;A beady eyed watchfulness for when thingsMay suddenly turn serious and need anOxygen mask, an ECG, and more of those curtainsWhisked around quickly.The quietly fainting patient must be revivedAt all costs. They save lives in here.(c) Shaista Tayabali, 2017 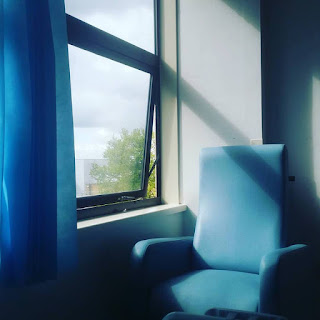 Sherry: Beautiful, Shaista. I can see those nurses, with their sharp eyes, and warm smiles. I so admire your compassionate nature, ever present in your work, and the way you always see the good, those small, human moments,  in every situation.

Shaista: I was diagnosed with Systemic Lupus Erythematosus when I was a teenager although it had reared its head earlier, when I was a child growing up in Bombay, India. I have done the rest of my growing up in and out of hospital. One Cambridge hospital in particular - the one where Quentin Blake did an incredible series of murals...art and poetry are displayed on many of the corridor walls. I keep hoping I'll find a way to include mine!! 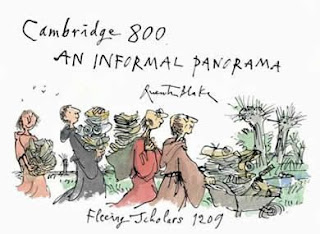 
Along with lupus, there is glaucoma, and a host of what the medics like to cheerily call the "co-morbidities"...or what I might call Fifteen Ways in Which I Might Die. Title for a new poem perhaps?

Sherry: I admire your courage, and your humour, my friend. If the people who decide such things read any of your poems, they will go on the wall for certain!

Shaista:  I meet all sorts of people in hospital. I am a friendly sort and life histories unravel themselves at top speed. Clive James, the Australian poet and critic, and I have befriended each other on the ward where we meet for our three weekly infusions.

Sherry: I remember the lovely piece you wrote about this gentle man, called "Gate of Lilacs." I loved it. "Life is everything. Now."

Shaista: It is a strange life - difficult to explain or describe. People on the outside want to know if you're getting better. Does it hurt? What happens to you?

So I started a blog and called it Lupus In Flight. Was invited to speak several times on BBC Radio, and interviewed for the Cambridge newspaper. Then I completed my Masters. And then I wrote a book. Am in the process of querying agents for publication....a memoir about a mysterious and terrifying illness is not generally click bait. I have written and edited for medical journals and invariably am asked if I am a medic myself.

No, No, I say. I'm on the other side of things. The helpless side. Except, of course, a writer is never helpless.

Sherry: I love the stories you tell through your writings. You always leave your reader feeling uplifted. Blessed. You have a beautiful heart, my friend. Do let us know when your memoir is accepted for publication, and we shall celebrate with loud hurrahs!

Thank you so much for this lovely visit, kiddo. We appreciate it greatly, and we wish you improved health in the months ahead.

Sigh. Shaista is pronounced "Shy-sta", which is very close to Shy-Star, a name by which she is known by those close to her. It is appropriate, as she is a radiant being. She glows. Do come back and see who we talk to next. Who knows? (for I don't, at this moment, LOL.) It might be you!

Email ThisBlogThis!Share to TwitterShare to FacebookShare to Pinterest
Labels: Past Poetry Blogs of the Week, Shaista Tayabali