The Coyote And The Peacock

For beauty, the coyote carried the peacock
across the desert in his teeth.
The sand was a sear on his paws,

but his trot was steady, and his grip was gentle.
Six sleeps, six fires in the sky.
Six star spun lullabies, six wakings.
For beauty, the coyote carried the peacock
across the desert in his teeth.

In the desert and river, beauty's as fleeting
as sugar dissolved on the tongue.  The river
stained the peacock's feather a dull red.
The desert blemished his eyes
near blind.  The coyote looked, but could not find
the beauty that he had carried and that had carried
him so far.  The coyote learned that beauty is beauty
is beauty, but is not love.
The peacock learned the hunger of a coyote. 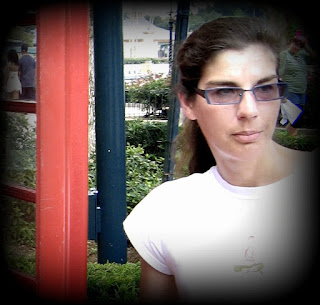 Kelli Simpson describes herself as 'a mother and poet living in Norman, Oklahoma'. She says that she 'still believes in newspapers, books with pages, and poetry that rhymes'.

We know her better as Mama Zen of 'another damn poetry blog'. Besides the blog, Kelli's work has most recently appeared in Bop Dead City, Cape Rock Poetry, Five: 2: One #sideshow, andThe Five-Two.

I wish I'd written many of Kelli's poems, actually – and this one in particular. It appeared on her blog very recently and was shared in our latest Poetry Pantry; many of you will have seen it already.

I normally wouldn't share something again here quite so soon; I'd let you forget it awhile, so you could then relate to it (almost) anew. But there's no way you're going to forget this one; it's so outstanding. So let's enjoy it again right now.

It has interesting origins! When I asked Kelli what she herself might say about it, she told me: 'When I started this poem, I was actually thinking about illegal immigration on the U.S. southern border.  Down there, human smugglers are called coyotes.  That was the seed. The poem that sprouted from it is quite different, but I think strains of the original idea are still evident once you know that they are there.'

Yes, I think so too. The peacock being carted like cargo across desert and river, for instance. Also, Coyote is the trickster, and I imagine people smugglers must be pretty tricksy. And when the living cargo are no longer of use to the smugglers, they may end up dead – at least, that is sometimes what happens to those who try to reach Australia from other countries; I expect it is much the same the world over.

But some poems have minds of their own and dictate the way they want to go. This poem did indeed become something else. In the comments at Kelli's blog, I called it a fable and several people agreed with me. Someone likened it to Aesop's. Others said it was even more than that: a parable. Googling definitions ruled out parable however, on the grounds that, while both are stories with a moral lesson, parables don't include animals or inanimate objects as characters. Fables do.

Certainly both characters in the poem learn a lesson at the end, though perhaps not quite so straightforwardly 'moral' as those in Aesop's fables.

It could be described as 'mythic' too – closely related to 'fable' – except that myths usually explain some social or natural event, and here there is no such explanation. Instead there is mystery. For instance, the number six – what's that all about? It might just be the time the journey happened to take, but the repetitions seem to invest that particular number with deep meaning, albeit a meaning we can't grasp. It feels magical. We have been taught that seven is a magical number, and if it was that we could accept and almost gloss over it – but six? That must be a very specific magic, which no-one's told us about before. Yes, a mystery. (A gentle mystery at that point, with the coyote careful of the precious peacock.)

So the story is intriguing, fascinating, appealing to something primal in us that hungers for desert and stars and epic journeys. But even more than the story, I respond emotionally, viscerally, to the beautiful language – the cadences, the repetitions, the subtle alliterations, the imagery and phraseology, the measured rhythms that make even the most arresting ideas seem absolutely right. ('The mud mother / called for his bones'; 'the beauty that he had carried and that had carried / him so far'.)

It calls to our imaginations, persuades us with its narrative and its language, and then saddens us with the inevitability of the ending. It seems a fragment of some whole mythic world in which the coyote and the peacock exist. I want one (any) of my favourite fantasy authors to create that world and show me where these two characters fit. At the same time, I don't really want them explained and contextualised; that would destroy their splendid mystery. I'm glad the poem leaves room for our own imaginings.

'Fable' is  the origin of the word 'fabulous'. In every sense, this is surely a fabulous poem.

Email ThisBlogThis!Share to TwitterShare to FacebookShare to Pinterest
Labels: I Wish I'd Written This, Kelli Simpson, Mama Zen