Against too many writers of science fiction

Why did you lure us on like this,
Light-year on light-year, through the abyss,
Building (as though we cared for size!)
Empires that cover galaxies
If at the journey's end we find
The same old stuff we left behind,
Well-worn Tellurian stories of
Crooks, spies, conspirators, or love,
Whose setting might as well have been
The Bronx, Montmartre, or Bedinal Green?

Why should I leave this green-floored cell,
Roofed with blue air, in which we dwell,
Unless, outside its guarded gates,
Long, long desired, the Unearthly waits
Strangeness that moves us more than fear,
Beauty that stabs with tingling spear,
Or Wonder, laying on one's heart
That finger-tip at which we start
As if some thought too swift and shy
For reason's grasp had just gone by? 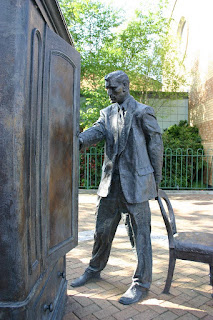 Ross Wilson's statue of C. S. Lewis in front of the wardrobe from his book The Lion, the Witch and the Wardrobe in East Belfast. Reproduced here under Freedom of Panorama.

Yes,  the famous C.S. Lewis is one of our 'living dead', but I felt this poem belonged in our Thought Provokers series, for the questions it raises. As soon as I read it, I wanted to discuss it with him. As he's not available, let me discuss it with you.

He has a point! SF can be too much like real life. I loved  the first StarWars movies (those which later became Episodes 4, 5 and 6) and also the return to form which was Episode 7. But I was very disappointed by the spin-off Rogue One. To me it was just a lot of war stuff, and there was far too much of that going on in the real world at the time; why should I wish to see more? My adult son, however, loved it and saw it as a modern version of  the Western. Well, I never was keen on Westerns either – except for High Noon, and Rawhide on TV. Depends what floats your boat (or powers your space-ship or something).

And we do like the fantastical; some of us anyway. There are those who like their speculative fiction scientific, within the bounds of belief even if what is described hasn't been invented yet. It's fascinating that life sometimes follows art, and things that were first written as science fiction have since been invented, from sliding doors to flat-screen TVs and of course the moon landing. (Yes I know, some people think that one is still fictional, but let's not get into that.)

Others of us prefer the fantastic to be, indeed, fantasy – beyond belief. Dragons, werewolves, time travellers, witches and wizards.... They are fairy stories for grown-ups. (Well, witches might be true, lol.)

On the other hand, it is still the human characters in these stories who interest us; or, occasionally, non-human characters who nevertheless have humanistic qualities of personality and emotion. We like to imagine ourselves in their situations, I think. We want them to have adventures, and we still want them to do normal things, particularly to make connections, fall in love, and have relationships.

I have known SF writers to object to being regarded as lesser authors because they write genre fiction, and to claim that important human truths can be conveyed equally well that way as through more 'literary' novels. I agree. (Fahrenheit 451. I rest my case.)

So I would take issue with Lewis. I think we do want 'the same old stuff', albeit in a new setting. We want to imagine new worlds, whether in outer space or a different dimension or some magical dream-space, but we want to find ourselves there.

Lewis's vision of the 'Unearthly' is very particular, though. It's well-known that he was a devout mystical Christian. His longing is really for the spiritual connection. He wants a sci-fi that puts us even more in touch with the wonders of creation, and therefore the wondrousness of the Creator. Maybe he really wants stories about Heaven.

It's interesting that he himself is best-known now for fairy stories in which children are transported from everyday reality into another world where they get to be heroic, and where they meet a lion whom all the critics identify as a Christ figure. Is that, indeed, what people are truly seeking from tales of other worlds – that connection to the divine which human beings seem to yearn for? (Well, perhaps not the atheists.)

I'm not an atheist, yet I don't know that I want my SF to be overtly spiritual like that. I think most good fiction IS spiritual in fact, though not necessarily overtly, because humans are spiritual beings; and that the true subject of most fiction, speculative or otherwise, is the development of the characters' souls. I don't want that to mean getting all churchy, though.

And then there are people who don't want to read speculative fiction at all, because it's too unrealistic.