This week I'm turning my feature over to Jeltje Fanoy, one of the founding members of the Melbourne Branch of the Poets Union of Australia, which has now long been known simply as Melbourne Poets Union.

In this post I share what she said at the 40th anniversary of that founding, a few weeks ago, including some of her own poems which she read.

I was another founding member, but as I no longer live in or near Melbourne, I didn't attend these celebrations. Jeltje kindly sent me her notes for my interest, including the poems. (Pity I can't give you the accompanying guitar performance too!) She graciously agreed to my immediate request to share them with you, along with a photo of her taken on that occasion.

What happened in Australian poetic history 40 years ago is probably only of passing historical interest to those it doesn't touch directly. However Jeltje raises points which are still relevant, I believe, to poets everywhere – e.g. about the notion of 'the genius poet' (a rare and exalted breed, apparently) and what is or isn't fit subject matter for poems.

I particularly like what she says about treating poetry as a craft to be learned.

Note: When Jeltje speaks of 'neo-liberalism', below, she refers to this phenomenon.

Aside from her thought-provoking speech, the poems she included are thought-provokers themselves, both in style and content. (That's intended as a compliment, of course.) 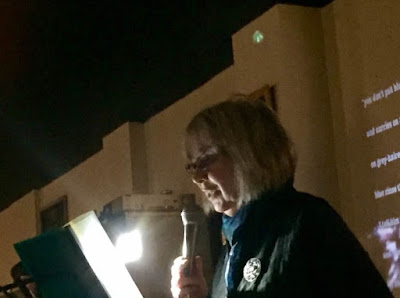 My name is jeltje, and I’m a founding member of the Poets Union, and collective effort press.

He came & went, like an advertisement for
Unemployment. Everyday the same: no house,
no job, no car, no fancy food. While he said: No,
advertisements screamed: YES! For FAST CARS! YES!
for HOUSES! YES! For expensive trips overseas!
Life had become a duality of YES! and NO,
(& nothing much in between)

Did they exist anymore? She wondered,
SOMETIMES, in between advertisements

(self-published in Poetry Live in the House and, also, by Melbourne Poets Union)

Many moons ago, the Poets Union was dreamed up by poets all over Australia, to give poetry more of a community focus, and I happened to be alive in those times…! 20 years ago I was asked to cut the cake for the Sydney Poets Union 20 years celebrations, during the Sydney International Poetry Festival. It’s great to be here tonight celebrating Melbourne Poets Union 40th!

I think the main idea behind setting up a poets’ union was, for me, to do away with, once and for all, the 19th century concept of the genius poet… reducing 99.99999 % of the population to silence or, at their best, second-rate class poetry citizen status. This was a feminist pre-occupation, in the seventies: I had poet friends who put up signs above their kitchen sink, with” Hey Genius, do the dishes…!”  It was like:  everyone could have a go at writing and performing and (self)publishing their work, and be justly rewarded for their efforts. The emphasis was on effort, and commitment, and working hard at your craft.

I guess I saw myself as being engaged in learning a craft, and, as time went on, becoming better at it.

Poem: when all of this started…!

when all of this
started,
we didn’t
know that,
when we started,
we didn’t
know that’s when it started, that, when it
started, that this is what it was, when it started
was it the start
of hearing each other,
did anyone see us,
the first time, in public, I don’t know,
perhaps,
they saw a flyer,
were they
there, for us, or just
happened
to be there,
did anyone know any
one, did we, ourselves,
know each other, at all,
well… well… well…well

Who were “we” when we set up the Poets Union?

I think the general feeling at the time was that performance poets were involved in the project of “freeing” poetry from the clutches of Academia, away from stuffy self-importance and expensive private school and university college peer group approval.  Poets, no longer striving for upper-class endorsement, needed their fellow workers to support them as fellow Poets Union members.

Of course universities are far more inclusive than they were, when we started the Poets Union. However, the “genius” aspect of poetry still seems to be a populist perception. With the rise of neo-liberalism and subsequent diminishing opportunities of being published, and being paid for it, there is a tendency of seeing only a very tiny number of people as being successful at making the grade, and the community focus of poetry eroded.
In opposition to the 19th century Romantic genius poet, I write about everyday things, finding common ground within a post-colonial context. In the early years, some MPU members considered me a “dangerous” feminist and I was confronted by angry, self-righteous male poets at public readings, but this seems to be, thank goodness, all in the past.
The following are two migration poems, and a poem I first performed for Marietta Elliot-Kleerkoper, a past President of MPU, for her birthday.
I’ve asked Sjaak de Jong to play with me, on guitar, for the last two.

painted into a corner
(for our refugees, on Manus)

not letting anyone down
and driven there  th crying eyes

The whistle on a lifejacket

The solid mass of posterity

Resistance to a chaotic mess

A traffic island in a traffic jam

The curtain going up, just one more time

Sun-dried emotions, on a slice of toast

The past catching up in a gust of wind

Lines engraved on the palms of hands

Material shared in “Thought Provokers’ is presented for study and review. Poems, photos and other writings remain the property of the copyright owners, usually their authors.
Posted by Rosemary Nissen-Wade