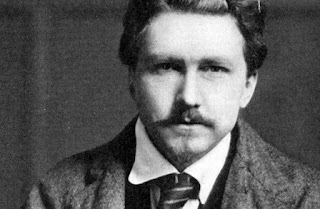 GOLDEN rose the house, in the
portal I saw
thee, a marvel, carven in subtle

stuff, a portent. Life died down in the lamp and
flickered,

caught at the wonder.

thou afar moving in the glamorous sun
drinkst in life of earth, of the air, the

Green the ways, the breath of the fields

open lies the land, yet the steely going
darkly hast thou dared and the dreaded
aether

Of all the major literary figures in the twentieth century, Ezra Pound has been one of the most controversial; he has also been one of modern poetry's most important contributors. In an introduction to the Literary Essays of Ezra Pound, T. S. Eliot declared that Pound "is more responsible for the twentieth-century revolution in poetry than is any other individual." Four decades later, Donald Hall reaffirmed in remarks collected in Remembering Poets that "Ezra Pound is the poet who, a thousand times more than any other man, has made modern poetry possible in English."

The importance of Pound's contributions to the arts and to the revitalization of poetry early in this century has been widely acknowledged; yet in 1950, Hugh Kenner could claim in his groundbreaking study The Poetry of Ezra Pound, "There is no great contemporary writer who is less read than Ezra Pound." Pound never sought, nor had, a wide reading audience; his technical innovations and use of unconventional poetic materials often baffled even sympathetic readers. Early in his career, Pound aroused controversy because of his aesthetic views; later, because of his political views. For the greater part of this century, however, Pound devoted his energies to advancing the art of poetry and maintaining his aesthetic standards in the midst of extreme adversity.