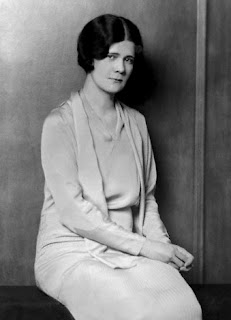 Elinor Wylie, 1885-1928
Prophecy
I shall lie hidden in a hut
In the middle of an alder wood,
With the back door blind and bolted shut,
And the front door locked for good.
I shall lie folded like a saint,
Lapped in a scented linen sheet,
On a bedspread striped with bright-blue paint,
Narrow and cold and neat.
The midnight will be glassy black
Behind the panes, with wind about
To set his mouth against a crack
And blow the candle out.
- Elinor Wylie, 1923

Elinor Wylie was born in Somerville, New Jersey in 1885 to a wealthy family. Raised in Washington D.C. to be a socially prominent “lady of the manor,” Elinor attended both The Baldwin School and Holton-Arms School. Well-educated as well as being a noted beauty and gifted artist, Elinor’s personal life often overshadowed her professional accomplishments; and she became most well-known for her multiple marriages and numerous affairs.

Torn between painting and writing, Elinor ultimately committed to words rather than oils. She wrote eight novels and books of poetry. Her first book, Incidental Numbers (1912), was published privately in England. Nets to Catch the Wind (1921) was her first critically acclaimed work. Other volumes of poetry include: Black Armour (1923), Trivial Breath (1928), Angels and Earthly Creatures (1929), and Collected Poems of Elinor Wylie (1932). In late 1928, she finished the last poem for Angels and Earthly Creatures, and prepared the manuscript for the printer. She died from a stroke the following day at the age of 43.