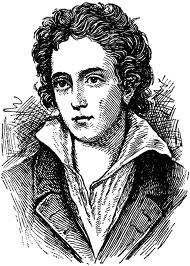 Princes, the dregs of their dull race, who flow

Through public scorn,--mud from a muddy spring,--

Rulers who neither see, nor feel, nor know,

But leech-like to their fainting country cling,

Till they drop, blind in blood, without a blow,--

A people starved and stabbed in the untilled field,--

An army, which liberticide and prey

Makes as a two-edged sword to all who wield,--

Golden and sanguine laws which tempt and slay;

Are graves, from which a glorious Phantom may

Burst, to illumine our tempestous day.

Percy Bysshe Shelley was born on August 4, 1792 in England and attended Sion House Academy before entering University College, Oxford, in 1804. He was ultimately estranged from his wealthy father and expelled from school for atheistic views he expressed in, among other writings, Zastrozzi (1810) and The Necessity of Atheism (1811).

In 1811 he eloped with sixteen-year old Harriet Westbrook (1795-1816) with whom he had two children, a daughter, Ianthe, born in 1813 and a son, Charles, born in 1814. Shortly after Charles’ birth, Shelley invited a male friend to live with his family and encouraged Harriet to embrace the concept of open marriage. This radical notion led to the disintegration of their marriage.

For the next three years Shelley traveled often to study under atheist journalist William Godwin. He continued to write poetry while studying under Godwin, and embracing his radical political philosophy. During this time Shelley met and fell in love with Godwin’s daughter Mary, also a poet and writer. In 1814 the two eloped.

In 1815 the Shelley’s moved to a home in London’s outskirts, soon after which his grandfather died and left them an annual stipend of £1000. His The Spirit of Solitude was published in 1816 and their joint effort History of Six Weeks Tour was published in 1817.

The Shelley’s moved to Italy in 1818, the year her novel Frankenstein was first published. Their son Percy Florence was born a year later. The couple continued work on numerous projects for the next few years, including a tragedy in five acts, The Cenci, and Men of England. Their appreciation of sailing led them to purchase a schooner, “The Don Juan”. While on a sailing trip on 8 July 1822, a storm overtook and sank the vessel. Shelley, just twenty-nine, drowned.