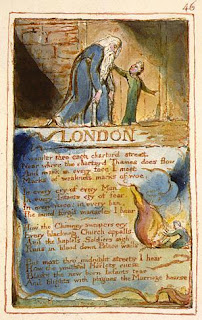 I wander thro' each charter'd street,
Near where the charter'd Thames does flow,
And mark in every face I meet
Marks of weakness, marks of woe.


In every cry of every Man,
In every Infant's cry of fear,
In every voice, in every ban,
The mind-forg'd manacles I hear.


How the Chimney-sweeper's cry
Every black'ning Church appalls;
And the hapless Soldier's sigh
Runs in blood down Palace walls.


But most thro' midnight streets I hear
How the youthful Harlot's curse
Blasts the new born Infant's tear,
And blights with plagues the Marriage hearse.

In his Life of William Blake (1863) Alexander Gilchrist warned his readers that Blake "neither wrote nor drew for the many, hardly for work'y-day men at all, rather for children and angels; himself 'a divine child,' whose playthings were sun, moon, and stars, the heavens and the earth." Yet Blake himself believed that his writings were of national importance and that they could be understood by a majority of men. Far from being an isolated mystic, Blake lived and worked in the teeming metropolis of London at a time of great social and political change that profoundly influenced his writing. After the peace established in 1762, the British Empire seemed secure, but the storm wave begun with the American Revolution in 1775 and the French Revolution in 1789 changed forever the way men looked at their relationship to the state and to the established church. Poet, painter, and engraver, Blake worked to bring about a change both in the social order and in the minds of men.


by A.M. Trumble
Posted by bttrflyscar